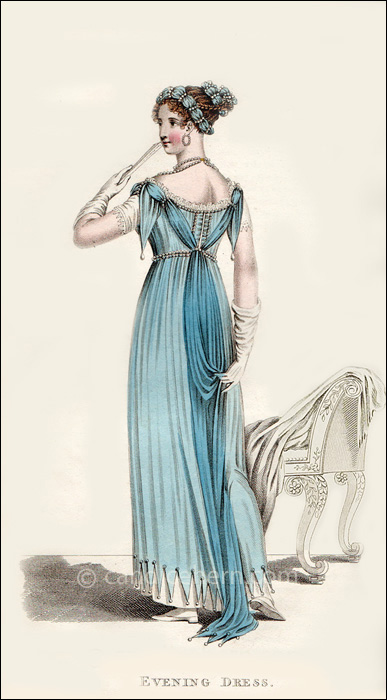 I think this is such a pretty print. I love the angle of the figure, giving us a good view of the back of the dress. Notice that she is wearing hoop earrings. Though they may seem very modern to us, they were clearly popular during the Regency, as they show up in fashion prints frequently.

The print is described in the magazine as follows, in one of the shortest fashion descriptions in the normally verbose La Belle Assemblée:

“A sea-green crape dress, vandyked round the petticoat, and ornamented with large beads; a full drapery over the shoulders and confined in the back with a pearl band, ornamented round the neck and down the back with beads. A full turban fillet tapered, worn on the head. Pearl necklace, white kid gloves and shoes,”

Though it is described as sea-green, every version of this print I’ve seen is painted in shades of blue.

In the “General Observations on Fashion and Dress” we learn more about the prevailing fashions for evening wear in October 1811:

“For full or evening dress, figured gauze, white satin, coloured crapes, short lace dresses, and gossamer nets are considered the most elegant. […] Crape dresses ornamented with coloured satin, fancifully displayed in sprigs and wreath patterns, or for full dress, in silver foil or spangles, are considered of the very first order of dress.”