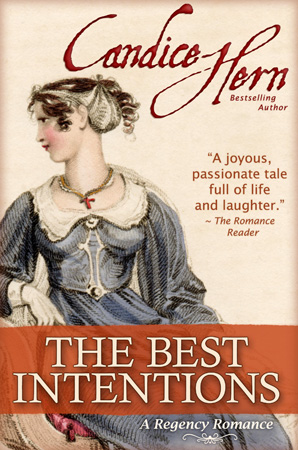 Miles, the Earl of Strickland is a handsome widower in search of a new wife to be mother to his two children. Having loved once, he seeks only a convenient arrangement with a mature woman. When two sisters come to visit his estate, the elder sister, a beautiful young widow, seems the perfect match. But Hannah, the artless younger sister, causes all his best intentions to fly out the window. 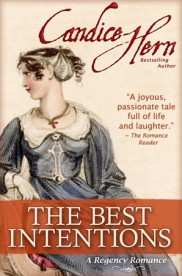 Miles stood on the steps of the Tudor porch in the inner courtyard and watched his brother-in-law’s elegant carriage make its way through the open archway. Godfrey himself rode close behind on horseback. It was like him, Miles thought, to steer clear of a carriage full of females. Another carriage could be seen coming up the straight gravel path from the gatehouse. Winifred’s luggage, no doubt. With two additional ladies along, Miles wondered how many other carriages poor Godfrey had been forced to bring. But there was no time to find out as the first carriage rolled to a halt at the porch steps.

Miles kept his hands clasped tightly behind his back. He experienced an unexpected twinge of nervousness at the prospect of meeting the young woman who had almost certainly been brought to Epping Hall for consideration as his future countess. Though he had every intention of remaining steadfast in his refusal to be a party to his sister’s infernal matchmaking and trust to his own inclinations in the matter, he nevertheless harbored a nagging curiosity about the young woman. Had she been encouraged to expect a formal courtship from him? Perhaps even an offer?

The devil take Winifred and her confounded interference.

A footman put down the steps and opened the carriage door. Miles offered a hand to Winifred, who gave him a broad smile as she emerged from the carriage.

“Winifred, my dear, it is good to see you,” he said, keeping hold of her hand. Despite his trepidation about this visit, he meant it. He was always glad to see her. “You look wonderful. One would hardly guess you have been traveling for days.”

“Your flattery is wasted on me, Miles,” she said and offered her cheek for his kiss. “But I have brought along two ladies who may have more appreciation for it.” She tilted her head toward the open carriage door.

Miles narrowed his brows in a quick scowl for her eyes only, then turned to hand out the first of the other passengers. His proffered hand was taken by the nearest of the two ladies, who ducked beneath the door and stepped out in a single fluid movement. She was slender and wore a dark green pelisse and matching bonnet. Although he knew little about such things, he felt certain the bonnet, with its brim turned up at the front and a small ostrich feather sweeping down over it, would be considered the height of fashion. Winifred spoke before Miles had time to steady the woman and release her hand.

“Miles, allow me to present to you Godfrey’s cousin, Lady Abingdon. Charlotte, my dear, this is my brother, Lord Strickland.”

So, this was the chaperone, Miles thought as he released her hand. She looked up at him for the first time briefly before dropping into a curtsey, and it was only due to years—nay, generations—of good breeding that his composure did not slip. This was no pinch-faced, aging duenna. Though clearly not in the first bloom of youth, she was strikingly pretty. Soft auburn curls arranged themselves artfully along the bonnet’s upturned brim, and its plume curved against a fair-skinned cheek that could not belong to the fortyish widow Joseph had described. This was a young and beautiful woman.

Collecting himself before he began to gape like a schoolboy, Miles nodded in acknowledgment of her curtsey. “Welcome to Epping Hall, Lady Abingdon. I hope you will enjoy your stay here.”

“It is a pleasure to meet you at last, my lord,” she said in a voice so soft, it was little more than a whisper, and Miles had to lean forward in order to catch every word. Her gray eyes drew him closer and twinkled with something that eradicated the initial impression of youth and innocence. All at once she was the sophisticated widow, and Joseph’s notion of a bit of dalliance seemed not so far-fetched after all. Damn the man for putting such an idea in his head.

“Cousin Winifred has spoken often of you and of Epping Hall,” she went on in that maddeningly soft voice, her eyes never leaving his. “My sister and I cannot thank you enough for allowing us to visit.”

Ah, yes. The sister. Her charge.

“You are both most welcome,” Miles said as he reluctantly turned his attention back to the carriage. The figure inside was busily gathering up what looked to be books and papers strewn about the floor at her feet. “Miss Fairbanks, I believe?” He held out a hand to help her down the steps.

She looked up, but, still enveloped in shadows, Miles could not make out her features. “Oh. Thanks, awfully,” she said and thrust a stack of books toward him.

He only just managed to grab them in time before she let go, and the unexpected and unwieldy pile bobbled precariously in his hands for an instant before he was able to get a good grip. The tiniest of gasps, apparently emanating from Lady Abingdon, was followed by the familiar sound of his sister’s chuckle.

Curse it all, what was going on here?

Miles lifted an eyebrow and a footman was instantly at his side, retrieving the books and patiently awaiting any other items that might precede the exit of the young lady. In fact, only one more untidy stack of papers and notebooks was forthcoming, this one with a pen box and a small pair of compasses perched on top. The footman took them and stood aside.

A small gloved hand took his. As he gently guided the young woman out of the carriage, he noticed dark smudges on the fingertips of her gloves. Despite his gentle efforts, the girl practically tumbled down the steps. One hand held onto a lopsided straw bonnet, attempting to straighten it as she descended. Her efforts were for naught. The bonnet listed slightly to the left and its bow of wide blue ribbon hung limply beneath her chin.

Miles kept hold of her hand to steady her. She looked up at him with huge, guileless blue eyes. “Oh, dear,” she said. “Are you the earl?”

Miles was quite simply dumbstruck. The girl standing before him could not be a day above sixteen. A mass of unruly brown curls spilled out from beneath the skewed bonnet. A sprinkling of freckles danced across a pert nose. But the small, heart-shaped face— very similar though slightly more rounded than that of her sister—was dominated by the enormous blue eyes that stared up at him, awaiting his response.

Good Lord, she was only a child. What could Winifred be thinking, expecting him to pay court to this … this schoolgirl?

He quickly composed himself and determined not to let his sister out of his sight before having a serious discussion with her.

“Yes, I am afraid I am indeed the earl,” he said and offered a smile to the girl, hoping to put her more at ease.

“I am pleased to make your acquaintance, Miss Fairbanks,” he said. “Welcome to Epping.”

“My lord,” the girl said and bobbed a creditable curtsey.

What she did next almost knocked him off his pins. While looking him straight in the eye, a huge grin spread across her face, forming two deep dimples in her cheeks. Then she glanced over to her sister, raised her brows, and cocked her head toward him. “Not bad, Lottie,” she said.