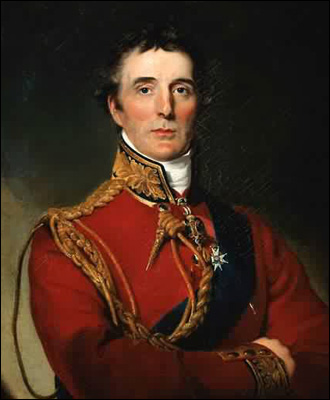 Arthur Wellesley was born in Ireland, a younger son of the Earl of Mornington. (The original family name was Wesley, but the spelling was changed in 1798.) He was something of a rake as a young man, and was sent by his mother and eldest brother into the army to “straighten him out.” There, he found his calling, immersing himself in the study of military science as he had never done at school, ultimately becoming one of the greatest generals in British history. He served in India, where he rose to the rank of major-general, and never lost a battle. In 1809, he was sent to the Iberian Peninsula to defend Portugal against Napoleon. He became Viscount Wellington after the Battle of Talavera that same year and was made General in 1811. After several successful sieges in Spain in 1812, he became the Earl of Wellington. Later that same year, after the Battle of Salamanca, he was elevated to Marquess of Wellington. Finally, after the Battle of Toulouse and the abdication of Napoleon in 1814, he became the Duke of Wellington. He was serving as British Plenipotentiary at the Congress of Vienna when Napoleon escaped Elba and landed again in France. Wellington assembled an allied army in Brussels, ultimately defeating Napoleon at Waterloo in 1815. He later served as prime minister.