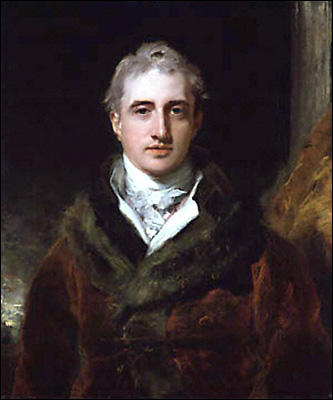 Robert Stewart, Viscount Castlereagh, was son of the Irish peer, the Marquess of Londonderry, whose title he inherited as the 2nd Marquess in 1821. He held minor positions in the Pitt and Addington governments and was Secretary of War under Lord Portland. Castlereagh was constantly at odds with the Foreign Secretary, George Canning, especially after the failure of the Walcheren Expedition. Canning threatened to resign if Castlereagh was not replaced. Lord Portland, the Prime Minister, was so fed up with their disputes disrupting the government, that in 1809 he secretly agreed to do as Canning asked. When Castlereagh found out, he challenged Canning to a duel. Canning missed his shot (never before having fired a pistol), but Castlereagh wounded Canning in the thigh.  Both were forced to resign their positions.

Castlereagh returned to the government in 1812 as Foreign Secretary, a post he held for ten years. He was instrumental in negotiations for the Treaty of Paris and represented Britain at the Congress of Vienna after the Napoleonic Wars. He was very unpopular, primarily due to having constructed a peace agreement that many saw as unfair, and also for his support of repressive measures at home. The stress of public criticism apparently led to an extreme state of paranoia. He committed suicide by slitting his throat in 1822.

His wife, Lady Castlereagh, was one of the Lady Patronesses of Almack’s.