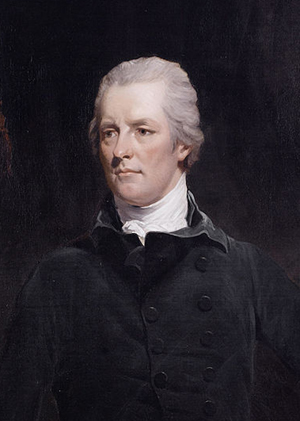 The youngest Prime Minister in Britain’s history, Pitt was only 24 when he first took office and remained Prime Minister for a total of 19 years over two administrations. (His father, William Pitt the Elder, had also been Prime Minister.) He held Tory views but considered himself an independent Whig. He championed Parliamentary reform, the Act of Union with Ireland, Catholic emancipation, abolition of the slave trade, and reduction of the national debt. His views changed after the Reign of Terror in France (he declared war on France in 1793) and, afraid of similar revolt in England, he cracked down on sedition and reform, suspending habeus corpus more than once. He resigned in protest in 1801, shortly after securing the Act of Union, when he learned the king had approached the anti-emancipation Addington to be prime minister. He accepted the king’s request to return to office in 1804 when there was fear of a French invasion. His prosecution of the war paved the way for Nelson’s victory at Trafalgar. Pitt died at 46 from liver disease caused by alcoholism. He never married and died heavily in debt.