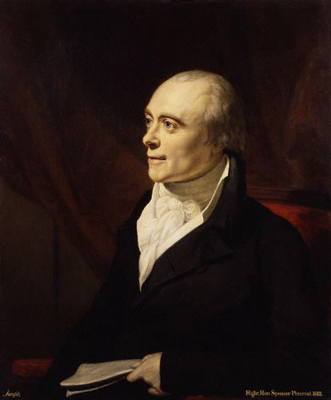 Spencer Perceval was Prime Minster from October 4, 1809 until his murder on May 11, 1812. He is the only British Prime Minster to have been assassinated.

Perceval was the youngest son of an Irish earl. He studied at Harrow and Cambridge, and became a barrister after studying law at Lincoln’s Inn. He gave up the law to enter politics, first as the MP for Northampton and eventually as Leader of the House of Commons. When he became Prime Minister in 1809, it was a weak ministry, with little support from Commons. During his three years in office, he faced enormous political crises, including the disastrous Walcheran expedition, the madness of the king and establishment of the regency, economic depression, and the beginning of the Luddite riots. But he successfully prosecuted the Peninsular War in the face of opposition defeatism, and won the support of the Prince Regent. His ministry had gained strength by the spring of 1812, when John Bellingham, a merchant with a grievance against the Government, shot him dead in the lobby of the House of Commons.