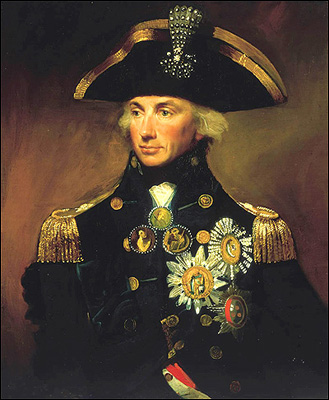 Horatio Nelson, 1st Viscount Nelson, is considered to be the greatest naval hero in the history of England. Son of a vicar, Nelson went to sea with the Royal Navy as a midshipman at the age of 13. He quickly made his way up the ranks, distinguishing himself by bold action and clever strategy, eventually being named Rear Admiral in 1797 after the Battle of Cape St. Vincent. He lost his right arm that same year (and had lost the sight in his right eye in 1794), but that did not impede his success at the Battle of the Nile in 1798, a victory which earned the him the title Baron Nelson of the Nile. He had married Fanny Nesbit in 1787, but rather callously cast her aside for Lady Hamilton in 1798. He was created Viscount Nelson in 1801 after another important victory, the Battle of Copenhagen. Napoleon began amassing forces to invade England, and to stop him, Nelson was made commander-in-chief of the Mediterranean in 1803. He was killed at the Battle of Trafalagar in 1805, a decisive victory which ensured British naval supremacy for the remainder of the war. To date, Nelson is one of only five non-royals to receive a state funeral in Britain.