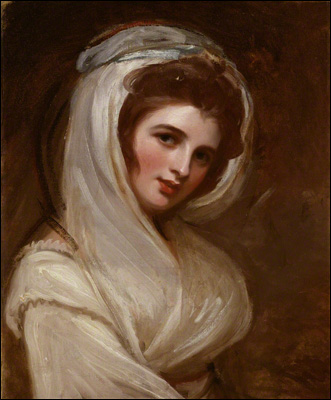 Born Amy Lyons, the daughter of a blacksmith, she later changed her name to Emma Hart when she entered the world of prostitution in London. Her beauty made her famous, and she became the mistress of several men over the years, as well as the favorite model for the artist George Romney. She lived for a time with Charles Greville, younger son of the Earl of Warwick, who was in love with her. But he needed to marry a rich wife and sent Emma to Naples in 1786 to be mistress to his uncle, Sir William Hamilton, who was the British envoy. Hamilton surprised everyone by marrying Emma in 1791. When Horatio, Lord Nelson came to Naples a hero in 1798, after the Battle of the Nile, Emma became his mistress. Hamilton, by then quite elderly, apparently tolerated the affair; some say he even encouraged it. In 1801, Emma gave birth to Nelson’s daughter, named Horatia, at Hamilton’s town house in London. Shortly afterward, Nelson bought a house in Merton where he, Emma, Hamilton, their “adopted” daughter Horatia, and Emma’s mother lived together. Hamilton died in 1803, the same year Nelson returned to active naval duty, leaving Emma behind, pregnant with their second child, who did not survive. Nelson died in 1805 and left instructions for the government to provide for Emma and Horatia. His wishes were ignored, and Emma fell deeply in debt. She spent a year in debtor’s prison before escaping her creditors by moving to France. She died penniless in 1815 in Calais.