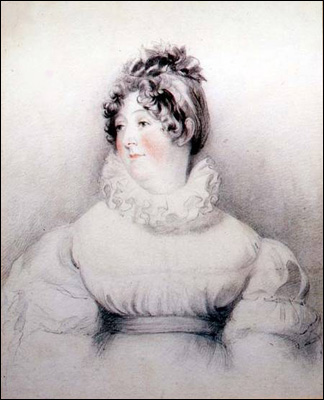 Amelia (known as Emily) Stewart, Viscountess Castlereagh, was another of the lady patronesses of Almack’s. She was the daughter of the Earl of Buckinghamshire and the wife of Lord Castlereagh, the unpopular Foreign Secretary. She frequently joined him in his diplomatic travels abroad, mostly notably during  the Congress of Vienna in 1815.

She was a prominent and influential member of London society. She is said to have been a stickler for propriety,  As a patroness of Almack’s, she is credited with establishing the rule that closed the doors of Almack’s precisely at 11:00pm, and is reported to have once turned away the Duke of Wellington when he arrived a few minutes late. Though one of the older patronesses, she is unlikely to have been elected to the position prior to 1812 when her husband became Foreign Secretary. She was not one of the more popular patronesses, as she was said to have eccentric manners and dull conversation.

Her husband became the 2nd Marquess of Londonderry upon his father’s death in 1821, making Emily the Marchioness of Londonderry. When her husband committed suicide in 1822, she was accused by many, including the Prime Minister, for concealing the serious nature of his mental illness. She lived quietly in the country for two years after her husband’s death, but returned to her busy social world in 1824. She was at that time censured by many of her husband’s friends for what they considered unfeeling conduct. Her own health soon began to decline, and she died in 1829.