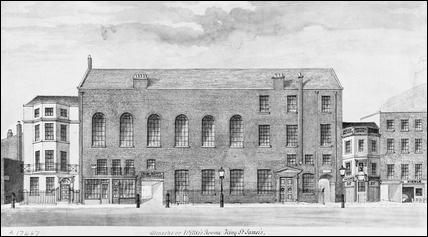 The plain, unassuming building on King Street was known as the “seventh heaven of the fashionable world.” It was owned by William Macall, who reversed the syllables of his last name in christening the club, thinking his real name would sound too Scottish and unfashionable. From the time it opened as exclusive assembly rooms in 1765, it was governed by an elite group of Lady Patronesses who Macall astutely allowed to determine who was permitted entrance and who was not. Patronesses came and went over the years, but always wielded social influence that bordered on despotism. Captain Gronow reported that the Lady Patronesses in 1814 were Lady Castelreagh, Lady Jersey, Lady Cowper, Lady Sefton, Mrs. Drummond-Burrell, Princess Esterhazy, and Countess Lieven. But there is also evidence that Lady Bathurst and Lady Downshire were also patronesses during this period. Balls were held on Wednesday nights during the Season. Non-transferable annual vouchers could be purchased for 10 guineas, but only if one of the patronesses approved. 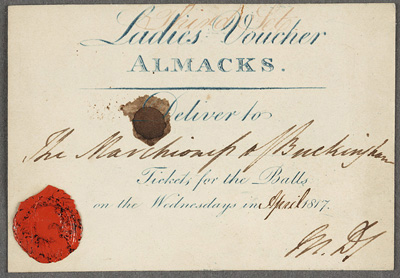 On the right is a rare surviving voucher from Almack’s from 1817 for the Marchioness of Buckingham. It is signed with the initials “M.D.”, which likely refers to Mary, Lady Downshire, one of the patronesses. This voucher is for balls in the month of April only, so apparently Lady Buckingham did not have an annual voucher,

Rejection of an application for a voucher could mean social ruin. Breeding, manners, and rank were key elements leading to approval, though fortune was not. The patronesses excluded wealthy merchants, “nabobs”, and “cits” from the lists. The weekly balls were modest affairs with only meager refreshments served and no wine or spirits. Almack’s Assembly Rooms consisted of a ballroom, supper rooms, and game rooms. Its social importance continued through the mid 19th century, until it finally closed its doors forever in 1863.

Today a modern office building stands on the site of Almack’s.