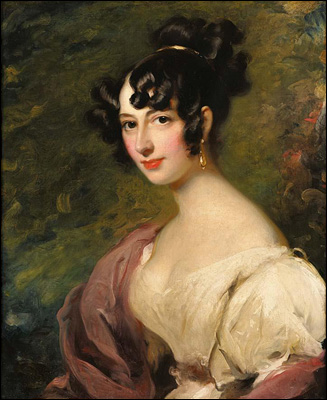 Born in Latvia, Dorothea Benckendorff married Count Lieven, who was the Russian ambassador to England from 1812 to 1834. The countess immediately became a leader in London society, and by 1814, if not earlier, was elected one of the patronesses of Almack’s Assembly Rooms, the first foreigner to be so honored.  Gronow described as her “haughty and exclusive,” though she is said to have introduced the German Waltz to Almack’s. But she was much more than a social butterfly. The countess was a prominent political hostess and held the confidence of some of the most important statesmen in London and Europe. She was considered to be at least as politically important, if not more so, than her ambassador husband. Hers was an influential voice in diplomatic circles, and she even performed at least one secret diplomatic mission for the Tsar. Some time after leaving England, the count was made a Prince and Dorothea became the Princess Lieven. Though she suffered from ill health in the last decades of her life, she continued to be involved in politics and diplomacy. Her collected letters provide a wickedly gossipy insight into Regency England.