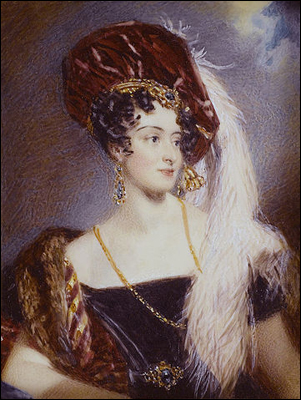 Lady Sarah Sophia Fane, daughter of the Earl of Westmoreland, married the 5th Earl of Jersey and became a leader of London society as a patroness of Almack’s Assembly Rooms. The young Lady Jersey of Almack’s fame is not to be confused with her mother-in-law, Frances, Lady Jersey, wife of the 4th Earl of Jersey, who was mistress to the Prince of Wales. (Prinny obviously preferred older women.)  Sarah, sometimes called Sally, was determined, through a great show of personal virtue, to distance herself from the notorious reputation of her mother-in-law. Captain Gronow described her in his memoirs as “a threatrical tragedy queen; and whilst attempting the sublime, she frequently made herself simply ridiculous, being inconceivably rude, and her manner often ill-bred.” She is reported to have introduced the quadrille to Almack’s in 1815.