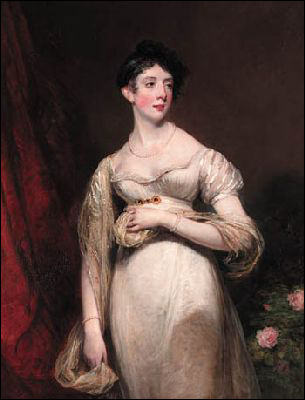 Emily was the daughter of the infamous Lady Melbourne, whose many affairs clouded the paternity of many of her children, including Emily. Her eldest brother, William, was twice Prime Minister of England.

Emily was married to the 5th Earl Cowper when she was 18. While he was quiet and reserved, she was warm and gregarious, and became a leading member of London society and a popular Whig hostess.  During the Regency years, she was one of the patronesses of Almack’s Assembly Rooms and, according to Captain Gronow, the most popular of them. It should be noted that Lady Cowper and most of the other patronesses at that time were young women in their 20s and not the older dowagers some readers assume them to be. They wielded enormous social influence.

Emily famously became the mistress of Lord Palmerston when her husband sank into a long of ill health. Their affair lasted many years, and her youngest child is generally thought to have been Palmerston’s. After Cowper died, they married in 1839. Both were by then in their 50s. She continued to be an important political hostess until her death in 1869.