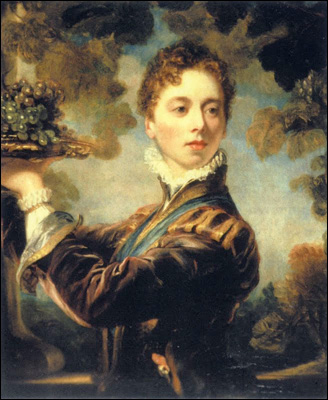 Lady Caroline Ponsonby was the daughter of the Earl (and the notorious Countess) of Bessborough, and grew up in the household of her equally scandalous relatives, the Duke and Duchess of Devonshire. She was educated there with her three legitimate cousins and two illegitimate cousins (daughters of the duke and Elizabeth Foster). Caroline was married at 19 to William Lamb, heir to Viscount Melbourne. Though happy at first, their marriage fell apart after the death of two children and the promiscuity of Lamb. In 1812 she embarked on the infamous affair with Lord Byron. It was Caroline who said about him that he was “mad, bad, and dangerous to know.” In 1816 she published anonymously the novel Glenarvon, a thinly-disguised account of her affair with Byron that also skewered many prominent members of the ton. In 1824 she suffered a nervous breakdown that apparently led to dementia. She removed to the Melbourne country estate, Brocket Hall, and died there in 1828. That same year, her estranged husband succeeded to the title Lord Melbourne, and later became prime minister of England.