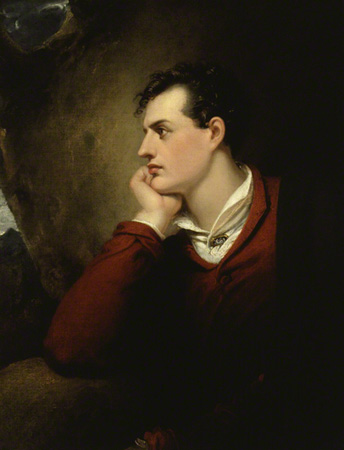 George Gordon Byron, 6th Baron Byron of Rochdale (yes, Rochdale!) was one of the great  poets of the 19th century. His most important works were the book-length narrative poems, Childe Harold’s Pilgrimage (1812) and Don Juan (1819 – 1824).  Though he lived in the age of Romanticism, his work was not, strictly speaking, Romantic. His work was more in the classical style of Pope and Dryden, which the Romantics rejected. Byron, in fact, despised the works of Wordsworth, Coleridge, Keats, and other Romantics. Though club-footed, Lord Byron was tall and handsome, and is said to have had a magnetic personality. His unconventional and often flamboyant life sometimes eclipsed his work. Love affairs with Caroline Lamb and others, reports of incest with his half-sister Augusta (a daughter born to her in 1814 is widely to believed to be Byron’s child), and hints at homosexuality all helped to secure the public’s interest in him. He married in 1815 and fathered a daughter, but his wife left him a year later, circulating rumors of physical and sexual abuse, adultery, and incest. Byron left England shortly afterward in 1816, fleeing his own notoriety. Yet only a few months later, he continued to flout respectability in the infamous summer on Lake Geneva spent with the physician, Dr. Polidori, the poet Shelley and his soon-to-be wife Mary Godwin, and Mary’s step-sister Claire Clairmont who became pregnant (or more likely, was already pregnant) with Byron’s child. It was during this intimate house party that the group, bored at being kept indoors by incessant rain, decided to dabble in fanstastical fiction. Mary penned the novel Frankenstein, and Dr. Polidori penned The Vampyre, the progenitor of Stoker’s Dracula and all subsequent vampire tales. Byron lived in Italy for a while and embarked on a passionate affair with the Countess Guiccioli, who left her husband to be with Byron. But as so often happened, his quicksilver nature soon found him bored with Italy and the countess, and he left for Greece to fight against the Turks in the Greek War of Independence. He died there in 1824 (from illness, not battle injury), and was mourned by the Greeks as a national hero.