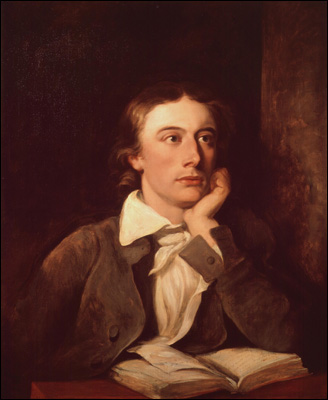 Though now considered one of the most important of the Romantic poets, in his own time Keats was criticized and his work skewered by the literary periodicals. He did not at first aspire to be a poet. He thought to become an apothecary, and spent almost 5 years as an apothecary’s apprentice, then a year at Guy’s Hospital, after which he passed the exam to become a Licentiate of the Society of Apothecaries. But during his apprenticeship, he’d been introduced to Spenser’s The Faerie Queen, and his love affair with poetry began. By the end of 1816, after applying for membership in the Royal College of Surgery, he was consumed with the fire to compose poems, and gave up his medical career. His first book of poems was published in 1817 and panned by the critics. Endymion was published in 1818, and was roundly criticized. 1819 is called the Great Year by Keats scholars because he produced so much of his best work that year, despite deep depression brought about by negative reviews. That spring and summer, he wrote La Belle Dames San Merci and the famous odes: Ode To a Nightingale, Ode on a Grecian Urn, etc. Finally receiving critical acclaim, he could not enjoy it due to ill health. Both his mother and brother had died of consumption (tuberculosis), and when Keats began to show symptoms, he became obsessed with his own mortality, knowing the disease would kill him. In 1820, he moved to the warmer climate of Italy, but it did not revive his health. He died in Rome in 1821.