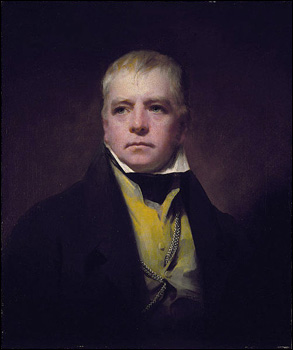 A prolific historical novelist, Scott was, unlike Jane Austen, a widely read and extremely popular author during his own lifetime. His most famous works include Ivanhoe, Rob Roy, and The Lady of the Lake. It might said that Scott invented the modern historical novel. Despite enormous popularity in the early 19th century, his work is viewed less favorably today, often criticized for being ponderous, wordy, and humorless. Scott did, however, play a major role in rehabilitating the perception of Highland culture. (It is worth noting, however, that Scott was a Lowland Scot, and that his re-creations of the Highlands were romantic and fanciful.) His organization of the visit of King George IV to Scotland in 1822 was a pivotal event: it was the first time a British monarch had visited Scotland since 1650. Scott’s inclusion of plaided pageantry was to have a lasting influence, by elevating the tartan kilt to become part of Scotland’s national identity.