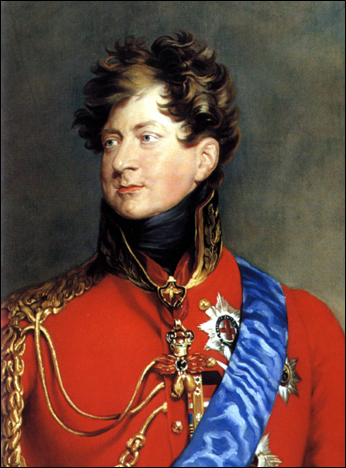 George, Prince of Wales, (often referred to as Prinny) was the eldest son of George III, and was named Prince Regent when his father became too mentally unstable to rule. His regency, 1811-1820, gives name to the period. He reigned as George IV from 1820 to 1830. Both his regency and his monarchy were marked by fiscal extravagance. His education and taste served to label him one of the most accomplished men of his age, yet his self-indulgence was seen as a waste of his talents. Overweight, overdressed, and oversexed, he was not popular with his subjects. His cultural achievements, however, cannot be denied. No other member of the Royal Family has ever been such a staunch supporter of art, architecture, music, and science. His many legacies include Regent’s Park and the National Portrait Gallery. Upon his death, the Duke of Wellington said that George IV had been “the most extraordinary compound of talent, wit, buffoonery, obstinacy, and good feeling — in short a medley of the most opposite qualities, with a great preponderance of good — that I ever saw in any character in my life.”