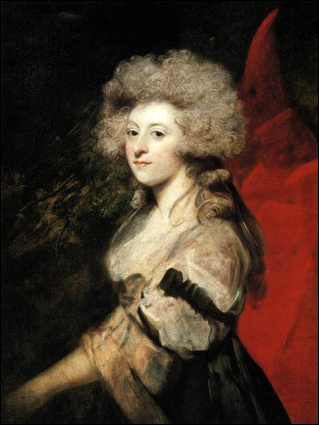 A Catholic widow, Maria Anne Fitzherbert was married to George, Prince of Wales in 1785, though the marriage was considered invalid under the Royal Marriages Act of 1772 because the king had not approved it. The young prince had known his father would not approve because Maria was a Roman Catholic, but he married her in secret, supposedly because she refused to be his mistress. There are many who believe they had at least one child together, but it has never been proven. Through all his mistresses and love affairs, the prince always seemed to return to Maria as his one true love, though their relationship came to a permanent end in 1811 when he snubbed her at a grand fête given at Carlton House to celebrate his new role as Regent. They never lived together again, but when King George IV died in 1830, he was wearing her miniature portrait around his neck, and was buried with it.