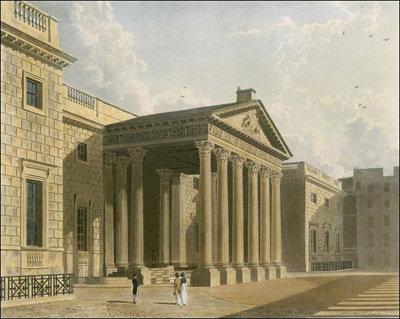 Best known as the residence of the Prince Regent for several decades, Carlton House was situated on the south side of Pall Mall, with its gardens abutting St. James’s Park. An existing house was rebuilt at the beginning of the 18th century for  Henry Boyle, created Baron Carleton in 1714. He bequeathed it to his nephew the  architect Lord Burlington whose mother sold it in 1732 to Frederick, Prince of Wales. In 1783, when Frederick’s grandson George, Prince of Wales, was granted possession of Carlton House and £60,000 to refurbish it, it was a rambling structure without architectural cohesion. Prinny had the house substantially rebuilt by the architect Henry Holland between 1783 and 1796. By the time the Prince and  Holland parted company in 1802, Carlton House was a spacious and opulent residence, which would have been designated a palace in many countries. When the Prince Regent became George IV in 1820, he deemed that all the current royal residences were inadequate. He considered renovating and expanding Carlton House, but instead chose to refurbish Buckingham House into Buckingham Palace. Carlton house was torn down in 1825.