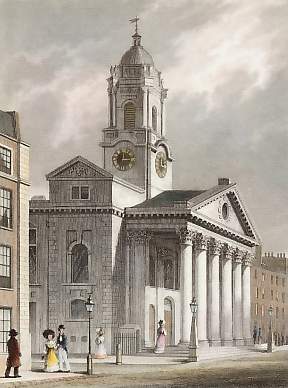 St. George’s was, and still is, the parish church for the affluent Mayfair district of London. The church was completed in1725 by John James, and was funded by the “Commission for Building Fifty New Churches.”  It has undergone very little alteration since that time.

Many important weddings, in real life and in Regency fiction, took place at St. George’s. The first entry in the Marriage Register is dated April 30th, 1725. In that year there were only thirty weddings, but from then onwards the numbers increased steadily till the beginning of the 19th century when they reached four figures. 1816 was a record year with 1063 weddings, including nine on Christmas Day.

Prince Augutus Frederick, Duke of Sussex, 6th son of George III, was married in St. George’s to Lady Augusta Murray, daughter of the Earl of Dunmore in 1793. In 1819, the illegitimate son of the Duke of Clarence (later King William IV) and his mistress Mrs. Jordan was married in St. George’s. Other notable marriages at St. George’s include those of the poet Shelley, the comedian and clown Joseph Grimaldi, novelist George Elliot, future prime minister Benjamin Disraeli, and future American president Teddy Roosevelt.

In Candice’s book Once a Gentleman, Prudence and Nicholas are married at St. George’s. 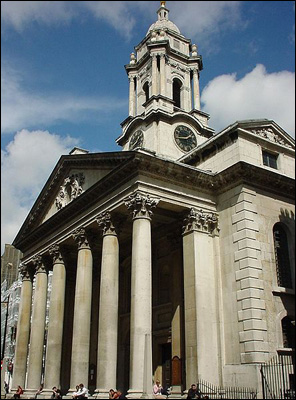