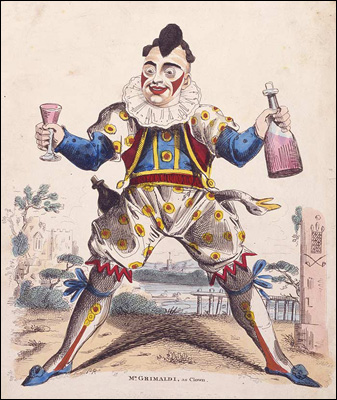 Son of the ballet master at Drury Lane and a ballet dancer, Grimaldi was a celebrated clown and master of the art of pantomime and physical comedy. He owed much in style to the Italian commedia dell’arte of the 17th century, but by putting his own improvisational spin on it, as well as interacting with the audience, he created a whole new style of comedy that is generally accepted as the basis for the modern day clown. By 1806, when he performed at Covent Garden in Harlequin and Mother Goose, he was already known as England’s favorite clown. He lampooned everyone from the Prince Regent to Brummell and got away with it.  At his death in 1837, the London Illustrated News said, “Grimaldi is dead and has left no peer.” His memoirs were edited by Charles Dickens.