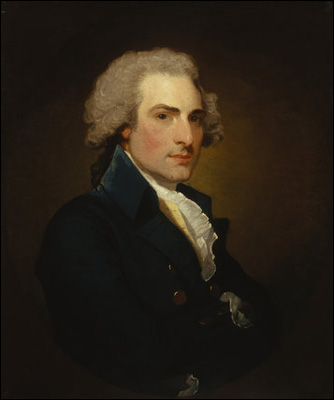 Brother to the famous Sarah Siddons, Kemble was an actor whose talent was reputed to be second only to his sister. He joined the company at Drury Lane in 1783 and in 1788 became its manager. Conflict with Sheridan, the owner, led to Kemble’s resignation as manager in 1802. The next year, he became manager of Covent Garden. His father died that year, and Kemble took the money he’d inherited and invested it in Covent Garden. When the theatre burned down in 1808, he would have gone bankrupt but for a loan from the Duke of Northumberland. When the rebuilt theatre opened a year later, the higher prices Kemble set to help defray the cost of rebuilding led to the OP (Old Price) riots. The  crowd shrieked and yelled and screamed so that the actors on stage could not be heard. This continued for 67 nights until a compromise was made and Kemble made a public apology. He retired from the stage in 1817 due to asthma. He moved to France and then to Switzerland for his health, and died in Lausanne in 1823.