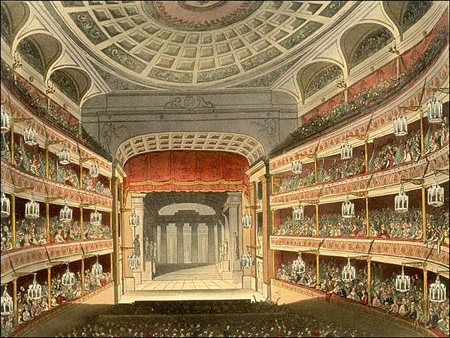 “New Covent Garden Theatre” by Thomas Rowlandson and Augustus Pugin, engraved by John Bluck, from The Microcosm of London published by Ruldolph Ackermann, 1810.

From the 1660s until the mid-19th century there were only two patent theatres in London: the Theatre Royal, Covent Garden and the Theatre Royal, Drury Lane. Only these theatres were allowed to perform spoken drama, i.e. plays without music, dance, or pantomime. The first theatre built on the site of the ancient Covent Garden was opened in 1732. Despite the frequent interchangeability between the Covent Garden and Drury Lane  companies, competition was intense, often presenting the same plays at the same  time. The first ballet was performed at Covent Garden in 1734, and Handel presented his first season of opera in 1735. (He gave regular seasons there, with operas and oratorios, until his death in 1759.) The theatre burned down in 1808, and among its losses was Handel’s organ. 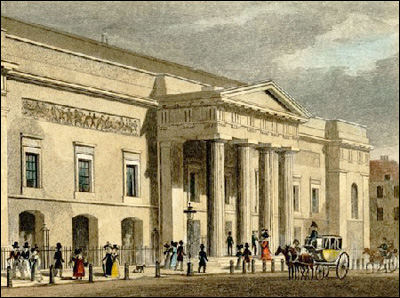 Covent Garden Theatre, published in Metropolitan Improvements or London in the Nineteenth Century, 1827.

The second theatre on the site, designed by Robert Smirke, opened in September 1809. Its interior is shown in the print, above, its exterior on the right. The Old Price Riots took place shortly afterward, in protest over the increase in ticket prices at the new theatre. Entertainments were varied. Plays, operas, and ballets were performed, as well as variety acts like the clown Grimaldi. 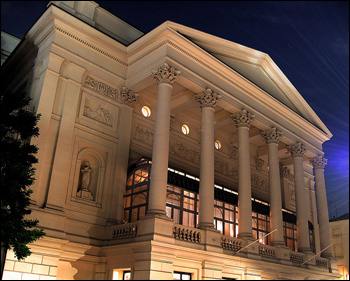 Smirke’s building burnt to the ground in 1857 and was rebuilt the following year. The current structure retains the façade, foyer, and auditorium from 1858, but little else since considerable reconstruction in the 1990s. It is now known as the Royal Opera House and is home to both the Royal Opera and the Royal Ballet.