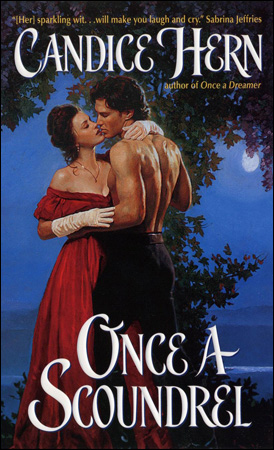 A reckless wager at cards places the ownership of a ladies’ magazine in the hands of Anthony Morehouse, a charming gambler. Edwina Parrish, the independent woman who edits the magazine, covets ownership for herself, and another wager is made for control of the publication. Escalating wagers ensue until both are in danger of losing more than they bargained for.

Candice’s collection of Regency fashion prints played an interesting role in the development of this story. Learn what curious aspect of the prints led to the creation of the Crimson Ladies.

Tony glanced again at the note in his hand, thankful that at least the numbers were clear. If he had not vaguely recollected Croyden mentioning his niece lived in Golden Square, he never would have been able to figure it out from the chicken scratch that passed for penmanship.

He dismounted and tossed the reins to his tiger, who would keep the team happy by trotting them around the square while Tony made brief work of this little matter of business. It was a modest townhouse in a modest square, on the fringes of more fashionable neighborhoods. It seemed an appropriate setting for a spinster involved in an occupation barely on the fringes of respectability.

He checked Croyden’s note once again. Blast the man’s handwriting, he could not be entirely sure of the niece’s name. If he’d been told last night, he couldn’t recall it. But then he’d been so thoroughly foxed, there might be a great deal he did not recall. It looked like “Paris” or perhaps “Partrige.” Tony pulled out the copy of the magazine he’d purchased that morning: The Ladies’ Fashionable Cabinet: wherein is presented a Polite Compendium of Intelligence and Amusement with a View to the Edification and Entertainment of the Fair Sex. At the bottom of the blue paper cover it said, “Printed for V. Croyden, Paternoster Row.” There was no mention of an editor’s name, as far as he could tell. The authors of most of the articles used obvious pseudonyms.

It was not ideal to call upon a lady whose name one did not know for certain, but he’d been in stranger situations and would persevere. He grabbed the knocker.

Some minutes later, the door was opened by a young woman with flyaway reddish-blonde hair, spectacles, and a suspicious eye. Not your typical parlor maid.

“My name is Morehouse. I am here to see Miss Paris.”

Her eyes widened and her mouth formed a perfect O. She stared at him for a moment before speaking. “You must be the new owner of the Cabinet.”

So, the household already knew what had happened. Croyden had certainly lost no time in trumpeting the news. “Yes, I am.”

“You’d better come in, then. We’ve been expecting you.” The young woman turned and gestured that he should follow her into the hall. “And her name’s Parrish, by the way, not Paris,” she called over her shoulder.

Tony began to think she must not be a housemaid after all, but one of the magazine’s spinsters. A handmaiden escorting him to an audience with the Queen Spinster. Lord, but he could not wait to be done with this.

The narrow hallway led past a dining room on the left and a stairway on the right. The woman entered an open doorway near the end of the hall. Tony followed her and found himself in a library or study crowded with worktables upon which papers and books were scattered about, though not in any sort of disarray. It was a busy room, where work was obviously done, but there was a certain kind of orderliness about it.

Behind a large desk to the right of the door sat a woman bent over a page of cramped writing. She raised her head at their entrance, and Tony’s breath caught in his throat as he found himself looking at one of the most beautiful women he’d ever seen.

She had black hair, very pale, clear skin, and perfectly arched dark brows over eyes almost as black as her hair. Her full lips were claret-dark against the fair complexion. Her coloring was so dramatic she had the look of being painted, like an actress in stage makeup. But as he stepped closer, he could see the coloring was perfectly natural. And perfectly breathtaking.

This was the Queen Spinster?

“Edwina, this is Mr. Morehead, the new owner of the Cabinet.”

The Queen stood and offered her hand. “I am Miss Parrish, the editor.” She stared at him curiously, and it was all he could do to step forward and take her hand. He was drowning in those dark eyes. “And you have already met my assistant editor, Miss Armitage.”

“I am pleased to meet you, Miss Parrish, and Miss Armitage,” he managed at last. And all at once he realized what he’d said and wrenched himself from the enchantment of her eyes. “Parrish? Your name is Parrish?”

He dropped her hand as though scorched. “Edwina Parrish?”

He stood back and studied her. He could see it now. How could he have missed that stubborn tilt of the chin, the determined set of her shoulders? “Well, I’ll be damned. If it isn’t the nemesis of my boyhood, all grown up and come back to plague me again.”

Her elegant brows lifted in surprise, then she smiled. It was a lovely, slow-breaking smile that lit up her face, and almost stopped his heart. Lord, she was glorious. How had such a beauty managed to remain a “Miss” all these years? He knew she must be almost thirty.

“I thought there was something familiar about you,” she said. “Anthony Morehouse? Dear heavens, is it really you?” She gave a soft chuckle and gestured that he should take a chair. “Morehouse, not Morehead. I never could read Uncle Victor’s handwriting. My goodness, but it has been a long time. I’m surprised you remember me. It’s been almost twenty years.”

It suddenly seemed like yesterday to Tony. For many summers during his youth, a neighbor of his father’s estate in Suffolk entertained visits from his granddaughter. Tony had spent many an afternoon romping and playing about the countryside with the headstrong girl. He hadn’t seen her since her last visit, when he was thirteen, shortly before her grandfather died and the estate was sold.

She’d been two years his junior, but a more outspoken, unconventional, annoyingly clever child he’d never met. She had not been like other young girls, prim and prissy and meek, but seemed to have no sense of propriety whatsoever. She spoke her mind and did as she pleased. His father had said it was because her mother was an artist. A woman who publicly displayed her paintings of half-naked classical figures could have no notion of how real ladies behaved. The young Edwina — he’d called her “Eddie” — had no notion that girls were not supposed to do certain things, to excel at masculine activities, to display an unfashionable degree of learning. She took great pride in demonstrating her superiority in every endeavor, and he had hated her for it. More accurately, he had hated himself for appearing less than perfect in her eyes. A fellow wanted to show to his best advantage in front of any girl, even one as irksome as Eddie Parrish.

“How could I forget the girl who made me feel like the village idiot?”

“I did no such thing.” The twinkle in her eyes said otherwise.

“Allow me to disagree. You challenged me at every turn. Always setting some wager on me.”

“And winning, as I recall.” She turned to her assistant, who stood scowling in the doorway. “We knew each other as children, Pru. We used to have footraces and such, and it seems that after all these years Mr. Morehouse is still grousing about losing a few.”

“Do you still have the Minerva?” He hadn’t meant to blurt that out, but after almost twenty years it still galled. In that last summer she’d been in Suffolk, he’d stupidly challenged her to a makeshift steeplechase – one he’d set up himself and had practiced enough times to insure his victory. When she had asked that the stakes be the tiny Roman head of Minerva, made of gilt bronze, that had been unearthed on his father’s estate, he’d agreed without a thought. He had been so certain he’d win.

“Good heavens,” she said, “you remember that?”

“How could I forget? My bottom was sore for weeks after my father found out I’d lost his most prized possession. He never forgave me.” It had been but the first in a string of reckless acts that had kept him continually in his father’s black books.

“Oh dear.” She attempted a contrite face, but her eyes told him how amused she was that she’d caused him such trouble. “You never told me that. I thought it was yours, that you’d found it.”

“Well, it wasn’t and I didn’t.” But she was right. He had bragged that he’d been the one to find it. He was tired of being bested by her, and he had grasped at anything to appear superior. She would remind him of that folly. “Do you still have it?”

“I do, actually. I’m quite fond of it.” She turned to Miss Armitage. “You remember the little Roman head, Pru?”

Miss Armitage’s fair brows drew together in a puzzled frown. “The one you keep on the writing desk next to your bed?” She sucked in a sharp breath and blushed scarlet, a spinsterish blush at the indelicate mention of something so intimate as a bed. Her eyes darted nervously about the room. “It is unlikely I could forget it, is it not?”

“Unlikely indeed,” Edwina said. She turned back to him and smiled. “It was the best thing I ever won from you.”

“Hmph. You were long-legged and I was a late bloomer.” So was she, apparently. How had that annoying, troublesome little girl grown into such a beauty? “It was stupid of me to accept all your challenges, knowing you would win. I’d beat you now, though.” Lord, what a childish thing to say. What was wrong with him?

“I have no doubt of it. In fact, you have already done so.” The amusement faded from her eyes. “You own the Cabinet, which by rights should be mine. I do all the work. I’m the one who’s made it a success. I can’t imagine why Uncle Victor sold it to you without ever bothering to ask if I might be interested.”

Her eyes widened. “I beg your pardon? I thought you owned it.”

“I won it in a card game. Thought it was a piece of furniture, but won it fair and square. I own it now.”

“Damnation!” Her fist came down hard on the desk, causing the writing set to wobble and dance precariously toward the edge. “He lost it in a card game? How unutterably stupid. And so now I must work for you because you had the luckier hand? Oh, this is monstrous.”

So, she was as hardheaded as ever. And as outspoken. A wicked little burst of glee swelled in his chest, and his original plan was discarded. He had a new plan, though. One that would pay her back for all those hopeless wagers of his boyhood, and still provide ample opportunity to keep this stunning beauty under his watchful eye for a time. It was devious. It was delicious. And he could hardly wait to put it into action.