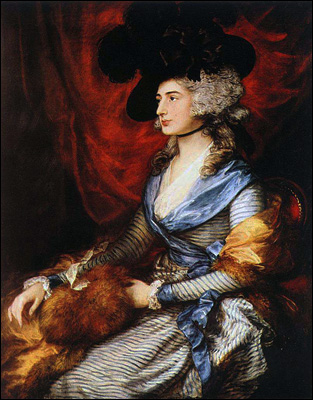 Born as Sarah Kemble into a family of actors, she became the greatest tragedienne of the late 18th and early 19th centuries as Mrs. Siddons. (Yes, in her case there was a Mr. Siddons. She married fellow actor William Siddons in 1773. They had seven children, two of whom died in infancy.) She made her Drury Lane debut in 1775 as Portia in The Merchant of Venice, and despite long experience in her father’s company, it was a disastrous performance and her contract was not renewed. She honed her craft in provincial companies for the next six years and was an immediate sensation when she returned to Drury Lane in 1782. For the next twenty years, she reigned supreme as the dramatic queen of Drury Lane and became a British cultural icon. She left Drury Lane in 1802 and played at various venues, including the rival Covent Garden Theatre. There, in 1812, she gave her famous farewell speech to a crowd of adoring fans whose applause was so thunderous at her performance of Lady Macbeth that she was not allowed to finish the play. It was her final performance in a play, though she did give occasional readings up until her death in 1831.