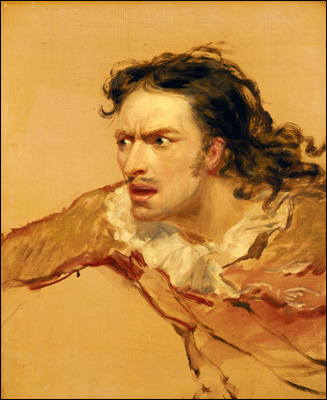 The son of an actress, Kean was a troublesome child and eventually went (or was sent) to sea as a cabin boy. He hated it, and showed an early talent as a Thespian when he managed to convince doctors that he was both deaf and lame. As a teenager he made a name for himself in Shakespearean roles at the York Theatre and then in a traveling troupe, and his reputation reached the ears of the king. George III commanded a performance at Windsor Castle. Kean embraced each role with passion, but was short of stature. In 1807 he performed in Belfast with Sarah Siddons, who famously called him “a horrid little man.” She ultimately had to acknowledge his talent and said that he “played very, very well, but there is too little of him to make a great actor.” His first London appearance, as Shylock at Drury Lane in January 1814, was a resounding success. Various other Shakespearean roles followed, demonstrating his enormous range as an actor and securing his position as the greatest actor of the age. Some say that Kean’s success led to Kemble’s decision to retire. Kean’s life off the stage was colored by licentious and drunkenness. He was charged with adultery with an alderman’s wife in a famous divorce case in 1825, after which his own wife left him. He became very unpopular with the public and was frequently booed and pelted with vegetables on stage. His last performance, as Othello (his son Charles Kean played Iago), was at Covent Garden in 1833. He collapsed on stage and died two months later.