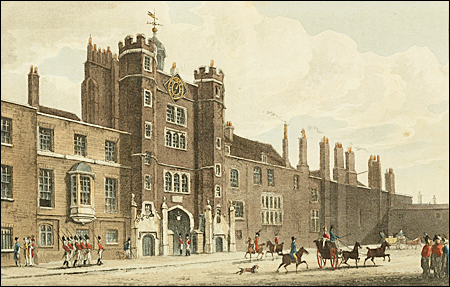 Built for Henry VIII in 1532, St. James Palace became the official London home of the British monarch in 1698 after Whitehall Palace was destroyed by fire. (Buckingham Palace became the principall royal residence under Queen Victoria, but St. James’s remains the official headquarters of the court, which is why ambassadors to Britain are called Ambassor to the Court of St. James.) George IV was born at St. James’s Palace. In 1809 parts of the palace were burned, but the splendid state apartments survived. The print shown above is from Ackermann’s Repository of Arts, 1812. 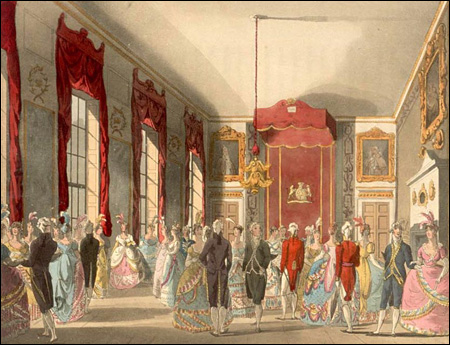 During the Regency (and before), it was the state apartments in which the King’s and Queen’s “drawing-rooms” were held, i.e. this is where young ladies were presented. (See the Regency World article on court dresses for information on court presentations.)

The second image shown here, from Ackermann’s Microcosm of London, 1808, shows a gathering of formally-clad members of the ton awaiting the arrival of either the king or the queen for the official “drawing-room.” There were literally two connecting drawing rooms. One served as an ante-room to the main room, which was called the grand council chamber. Note there is no furniture. One did not sit in the presence of the king or queen. 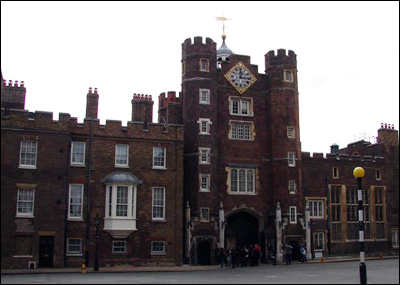