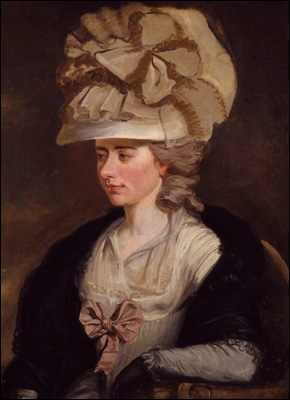 Daughter of the famous musician and musicologist, Charles Burney, Frances Burney was a novelist, diarist, and playwright. She wrote four novels, eight plays, one biography, and twenty volumes  of journals and letters, almost all of which are still in print. In addition to the critical respect she receives for  her own writing, she is recognized as a literary precursor to prominent authors  who came after her, including Jane Austen and William Makepeace Thackeray. We know her novels were read by Jane Austen. (Candice owns a 1796 first edition of Fanny Burney’s Camilla, in which “Miss J. Austen, Steventon” is listed as one of the subscribers.) It might also be said that Burney inspired the title of Austen’s most popular work. In the final pages of Cecelia: “The whole of this unfortunate business,” said Dr. Lyster, “has been the result of PRIDE AND PREJUDICE.” (The caps are Ms. Burney’s.) Thackery is said to have based his depiction of the Battle of Waterloo in Vanity Fair on the first-person account in Fanny Burney’s diaries. Burney’s first novel, Evalina, was published anonymously in 1778. When her identity as the author was revealed, she became something of a celebrity as the book was widely praised by Dr. Johnson, Edmund Burke, and others for its unique narrative and comic voice. All of Burney’s novels explore the lives of English aristocrats, and satirize their social pretensions and personal foibles, with an eye to larger questions such as the politics of female identity. In 1786, when she was a spinster of 33, Fanny accepted a position at court as “Second Keeper of the Robes” for Queen Charlotte. Unhappy at court, she requested and received release from her position in 1790 due to ill health. She maintained friendly relationships with the Queen and the Princesses throughout her life. Fanny supported the cause of the French Revolution, and in 1792 became involved with a group of exiled French “Constitutionalists,” including General Alexandre D’Arblay, an artillery officer who had been adjutant-general to  La Fayette. She married D’Arblay in 1793 when she was 41, and gave birth their son a year later. When her husband was offered a post in Napoleon’s government in 1801, Fanny and her son followed him to Paris. When war between England and France resumed in 1802, they were stranded in France, and remained in Europe through the Battle of Waterloo in 1815. Fanny Burney’s journals of her time at the English court and in Paris during the Napoleonic Wars offer first-hand accounts of scores of significant political events, including the Battle of Waterloo, and continue to be  some of the most intriguing historical resources of the period.