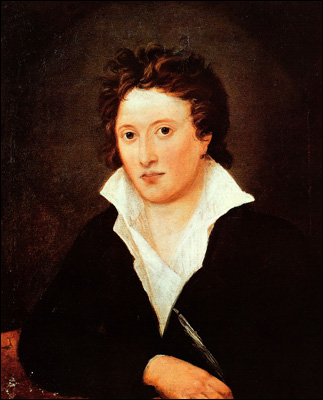 Son of a Member of Parliament, Shelley was educated at Eton and Oxford, but espoused radical social and political views that made him unpopular. He was eventually sent down from Oxford after publishing a pamphlet on atheism. He began writing poetry while at Eton and possibly earlier, and also published his first gothic novel when only 17. Like Byron, Shelley’s life tended to overshadow his work. He had very liberal views on free love and open marriage and lived by them, which, combined with his radical politics, caused much of his work to be dismissed until well after his death. In 1811, the 19-year old Shelley eloped to Scotland with his 16-year old girlfriend, Harriet. He tried to set up a ménage à trois by introducing his friend Thomas Jefferson Hogg into their household, but his young wife objected. In 1814, Shelley abandoned Harriet, pregnant with their second child, to run away with 16-year old Mary Wollstonecraft Godwin. In 1816, the two of them, along with Mary’s step-sister Claire, visited Byron in Switzerland. The two poets inspired each other and each wrote some of his best work that summer. When the Shelley party returned to England, with Claire pregnant with Byron’s child, they were faced with the suicide of Harriet Shelley, who drowned herself in the Serpentine in Hyde Park. Shelley lost custody of his children, who were given into foster care by court order. Two weeks later, Shelley and Mary were married. They returned to Europe in 1818 and lived in various Italian cities for the next four years. During this time some of Shelley’s most important works were written, including Prometheus Unbound. In 1821, inspired by the death of Keats, he wrote the elegy Adonais. In 1822, at age 29, Shelley drowned during a storm at sea in his schooner named Don Juan, in homage to Byron. Debates over his death still abound. Was it accidental? Suicidal? Or was he murdered for his politics?