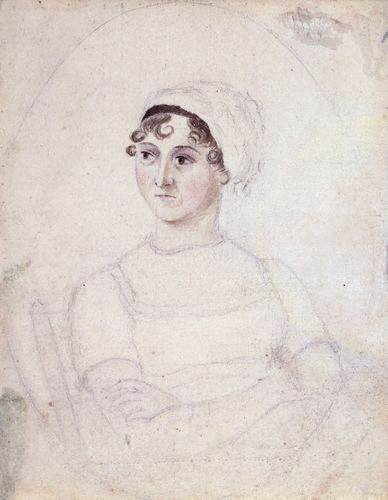 The novelist whose books were the antecedent of all modern romances, Jane Austen was the daughter of a clergyman and remained a spinster all her life. Though she had been writing since 1789, her first novel was not published until 1811. Sense and Sensibility was published anonymously (“By a Lady”), and her brother Henry financed the publication. The novel was well-received and made a small profit for her publisher. Her second published book, Pride and Prejudice had been written much earlier, in 1796-97, and had been submitted shortly afterward to a different publisher, and rejected without a reading. The success of Sense and Sensibility encouraged her to unearth the older book. It was published in 1813 as written “By the Author of Sense and Sensibility.” Mansfield Park was published in 1814, the first original work not based on her earlier writings. Emma came next in 1815, and was dedicated to the Prince Regent, after he gave her permission to do so (which meant she had no choice). She disliked the prince and was not thrilled to be forced to honor him with an effusive dedication. Northanger Abbey (a reworked version of a novel she had written years earlier and shelved) and Persuasion (a newly completely work) were published together after Jane’s death in 1817, with a “Biographical Notice” written by her brother in which her identity as the author of the previous four books was revealed for the first time. She died at 41 from what is now suspected to have been Addison’s disease. Her novels were only mildly successful in her life, and fell out of print for several decades. Though Scott publicly lauded her during her lifetime, her genius was not widely appreciated until the end of the 19th century. Today, she is recognized as one of the most important authors in the history of English literature. Her works represent a shift in the style of the novel. Omniscient narrative became infused with the point of view of specific characters, giving her books a more intimate feel, and lending her depictions of English country life and people an immediacy that was unique for its time. Language is less formal and constrained than that of her predecessors and many of her contemporaries. In his 1816 review of Emma, Scott cited it as one of “a class of fiction which has arisen almost in our own times, and which draws the characters and incidents introduced more immediately from the current of ordinary life than was permitted by the former rules of the novel”, and “copying from nature as she really exists in the common walks of life, and presenting to the reader, instead of the splendid scenes of an imaginary world, a correct and striking representation of that which is daily taking place around him”.