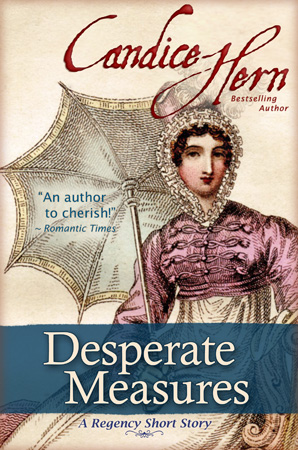 Lydia Bettride has a plan. To capture the attention of Geoffrey Danforth, the man who has stolen her heart but barely notices her, she has engaged the help of Phillip, a friend of her brother’s, to play the love-smitten fool in public, in hopes of piquing the interest of her unnamed love. But when Geoffrey himself shows up to take Phillip’s place, what’s a girl to do?

Note: This is a short story of approximately 10,000 words. 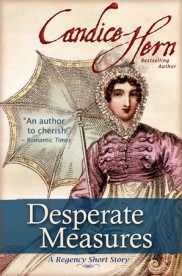 She was going to commit murder. If that scoundrel Philip Hartwell did not show up soon, Lydia Bettridge was going to track him down and rip his heart out. After all, this whole scheme was his idea. If he hadn’t suggested it in the first place, and if he and her brother Daniel had not gleefully concocted the plan, she would not now be waiting on pins and needles to learn whether or not it would work.

Or perhaps all that gleefulness had been at her expense. Had they been making a game of her, playing on her disappointment, poking fun at her unrequited affections?

By God, she would rip out both their hearts. With a rusty blade.

Lydia scanned the ballroom again, maintaining as casual an air as possible as she sought out Philip’s bright red hair among the crowd milling about in groups, waiting for the first set to begin. She was just about to stomp her foot in frustration when she saw him. Not Philip, but … him. Dear heaven, it was Geoffrey Danforth, the secret object of her scheme, and he was at that very moment making his way across the room directly toward her.

Her belly seized up in a knot of panic. What was she to do now? And where the devil was Philip?

“Here comes Danforth, my dear,” her mother said in hushed tones. “And he is smiling at you and looking exceedingly handsome in that gold waistcoat. The color sets off his hair nicely, don’t you think? I hope you will not reject him like all the others. I suspect poor Philip must be delayed. You would certainly be forgiven if you did not wait for him any longer.”

Lydia had claimed a prior commitment for the opening set when asked to dance by three other perfectly suitable gentlemen, causing her mother to cluck and twitter with vexation. She was not pleased that Lydia had promised to be led out for one of the most important dances of the evening by her brother’s best friend Philip, who no had marital intentions toward Lydia or anyone else, and for whom Lydia had no more than a sisterly affection. “Such a waste,” her mother had said more than once.

And here came Geoffrey Danforth, with his flashing blue eyes and a smile to make a girl weak in the knees. Oh dear.