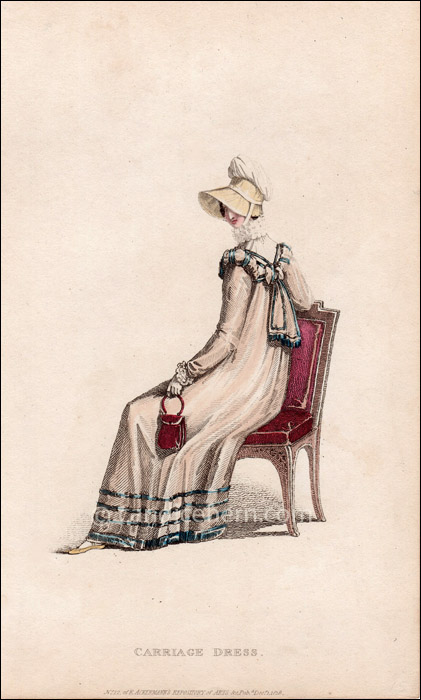 One especially interesting detail in this print is the reticule. In the second half of the decade, reticules for outdoor wear became more substantial, with a more rigid shape and a fixed handle. Indeed, they began to look very much like a modern purse. The soft fabric drawstring reticule continued in use for quite a long time, but this more rigid style is seen more often in fashion prints going forward.

“A gown of pale faun-colour cloth, made a walking length, and trimmed round the bottom with four rows of rich blue silk trimming. The body, which is cut very low, is ornamented in such a manner as to have a novel appearance, with a similar trimming, but very narrow. The back, which is cut down each side, is finished at the bottom of the waist by bows and long ends, trimmed to correspond. A very tasteful half sleeve over a plain long sleeve, made tight at the wrist, and bound with blue trimming; it is finished by a narrow ruffle composed of three falls of tulle; fichu of tulle, with a ruff to correspond. When worn as a carriage dress, the head-dress is a bonnet, the crown composed of white satin at the top, and the middle and front of Leghorn; it is lined with white satin, and ornamented only by a white satin band and strings. An India shawl is also indespensable to it as a carriage dress, for which it is elegantly appropriate. 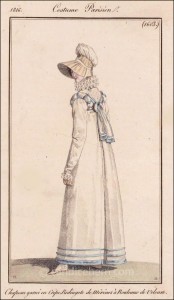 “Our dresses this month [including this one] are both French; but as our readers will perceive from our prints, they are in the best style of Parisian costume. We have been favoured with them by a lady who has just returned from Paris.”

Perhaps the lady returned from Paris with a copy of Journal de Dames et des Modes. The print shown on the right, from the November 5 issue of the Paris edition of the magazine, shows what appears to be the same dress and bonnet. The Ackermann print posed the model seated, added color to the dress, an extra row of trimming at the hem, and a lovely red reticule. But it certainly appears to be the same dress. Click on the image to see a larger version.