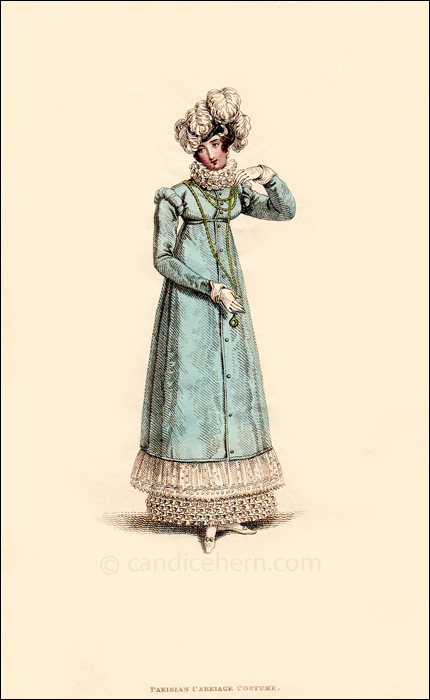 Though the print title names this a Carriage Costume, the text header reads “Public Promenade Dress.” As with most carriage dresses, this one would also work as a walking dress, so either heading is appropriate.

“Round dress of dove-coloured sarsnet, ornamented at the border with four rows of quilling of white satin ribband. A three-quarter pelisse of rich pale blue levantine, buttoned down the front, the border finished by a double flounce of broad white lace of a Vandyke pattern. The sleeves surmounted by mancherons, and turned up at the wrist with Vandyke cuffs of white satin. Black velvet dress hat with a very full plume of white feathers. Gloves and shoes of a pale primrose kid. English triple ruff, and eye-glass depending from a chain of gold.” 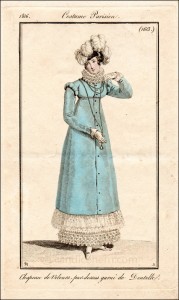 This print was copied from a Costume Parisien print in the French publication Journal des Dames et des Modes, December 15, 1816, shown here. The print is signed by the artist Horace Vernet. When British publications such as The Lady’s Magazine and Fashions of London and Paris first began to “borrow” prints from the French magazine in the late 1790s, the British prints did not match the quality of the French prints, which featured designs by artists such as Carle Vernet, father of the artist of this print. By 1810, however, newer British magazines, such as La Belle Assemblée and Ackermann’s Repository, produced much better quality prints than the French prints they copied.

Click on the French print to see a larger version.