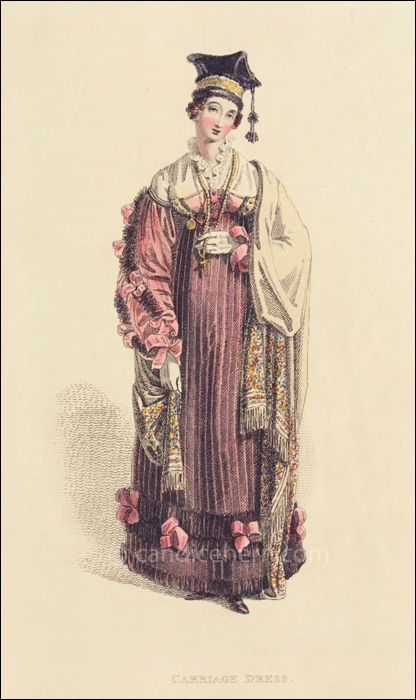 This print represents why I begin to lose interest in fashion in the late Regency: it just gets a bit too crazy for my taste. Too much going on. Too much ornamentation. The silhouettes no longer flattering. But in the interest of historical honesty, as it does represent a genuine trend in late Regency fashion, I include it here in the Regency World.

“A high body of jaconet muslin, with a lace frill, over which is a low one, formed of pink silk, and trimmed with the same material; the upper part of the trimming is tastefully ornamented with bows of pink ribbon. Long loose sleeve, finished down the arm with bands and bows, to correspond with the trimming of the train; it is drawn down the arm at the wrist, and ornamented with a large pink bow. A superb French shawl is thrown carelessly over the shoulders. The hair is dressed very much off the forehead, and low at each side of the face. Head-dress, the Polish cap, which is uncommonly novel and pretty; it is composed of black velvet, and ornamented with a silk tassel and gold band. Necklace, ear-rings, and cross, composed of gold and pearls. White kid gloves, and black levantine sandals. Mrs. Gill, of Cork-street, Burlington Gardens, has favored us with the original and fancy dresses given in our prints this month.”

Mrs. Gill’s designs are frequently seen in Ackermann’s Repository (e.g, see this lovely half-dress and this tasteful mourning dress), but this example, in my opinion, in not one of her better efforts.