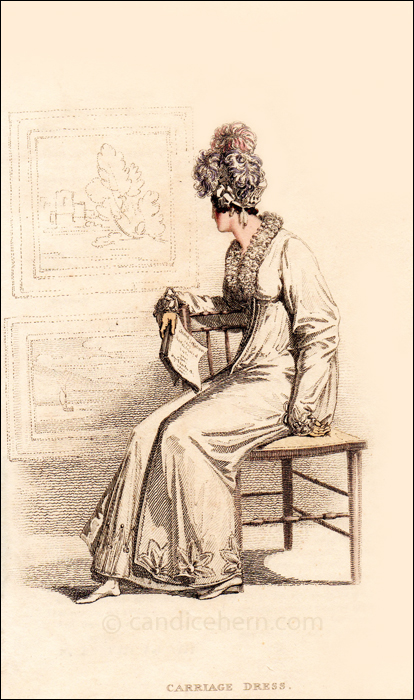 This print shows a woman viewing paintings, and the program in her hand says “British Institution” at the top. In the same issue of the magazine there is an article entitled “Exhibition of Paintings by the Flemish and Dutch Masters at the British Institution, Pall Mall.” A nice little connection. The British Institution plays a small role on my book In the Thrill of the Night, as explained here.

“White satin pelisse, richly ornamented at the feet with clusters of leaves made in white twilled sarsnet, headed with tull; open fronts, trimmed to the bottom of the waist with a superb shell trimming of white satin ribbon and tull; loose unconfined sleeve, with corresponding trimmings at the hand. Hat composed of white satin and tull, with a plume of feathers of the pomona green. Half-boots of similar colour. Gloves en suite.”