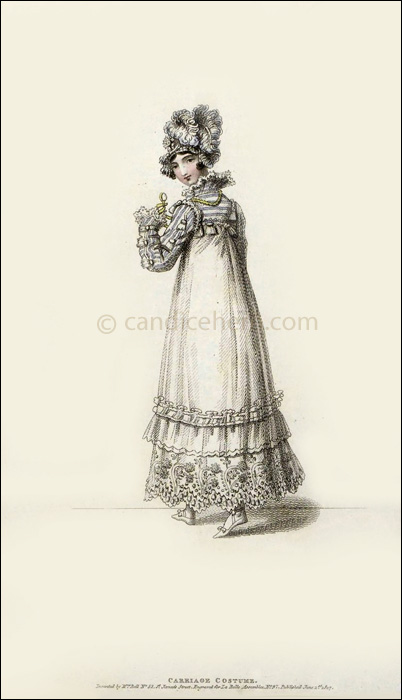 The provenance at the bottom of the print tells us that this dress was “invented by Mrs. Bell,” a frequent contributor to this magazine.

Though this is called a “Carriage Costume,” it would equally serve as a Walking Dress.

Note the quizzing glass on a gold chain, which is almost lost amongst all the fussiness of trimmings.

The dress is made of book muslin, which is the most sheer of any of the muslins, thin and light with a slightly bluish tint. The spencer is made of “Armozean” silk which I suspect is meant to be “Armozeau”, a corded silk similar to lutestring.

“Round dress of India book muslin, elegantly embroidered and finished by a flounce of the most superb needle-work. Spenser of Armozean silk, the ground white, with narrow stripes of satin, the color of the purple lily of Sharon; the whole trimmed with narrow blond of an elegant pattern, and the sleeves finished on the outside of the arm according to the military costume of Naples. Anglesea cap with a plume of rainbow feathers, the most predominant sades answering to the stripes of the spenser. Kid slippers, or satin half-boots, to correspond with the colours of the feathers or spenser stripes; and Limerick gloves.”