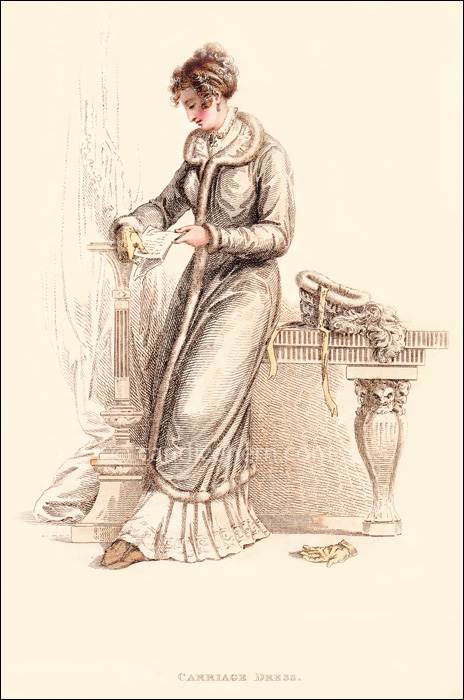 This print presents a charming scene where one can imagine that the lady has just arrived home to find a letter. Impatient to read it, she tosses her hat on the hall table, pulls off one glove to better handle the letter, tosses it to join the bonnet, but it misses the tables and falls to the floor, unnoticed.

One interesting fashion note is the outer garment, called a “wrapping coat.”  It is curious that it is not called a pelisse, which is certainly what it looks like.

“CARRIAGE COSTUME. A plain high morning robe of India muslin, with an à la Grecque border of needle-work at the feet. A French wrapping coat of grey or blossom-coloured silk, trimmed entirely round with swansdown. Hair in dishevelled curls and twisted bands. Beehive hat, composed of the same material as the coat, with strings of lemon-coloured ribbon, and ornamented with two curled ostrich feathers. Half-boots of buff silk, and kid gloves of a lemon colour. 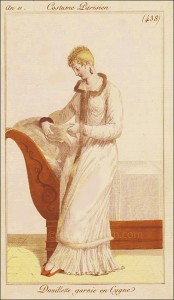 “These dresses [this one and the other print in this issue] are furnished by Mrs. Gill, Cork-street, Burlington Gardens: which circumstance will sufficiently recommend them to the attention of the elegant and tasteful female.”

Not to put too fine a point on it, but Mrs. Gill did not come up with this design on her own, but based it on a  much earlier print from the French magazine Journal des Dames et des Modes shown here. (Click on the print to see a larger version.) This French print is dated December 31, 1802, nine years before  the Ackermann print above. Ackermann’s artists have made a more interesting design, with more intriguing details, and have updated the hairdo. But otherwise, it is clearly based on the French print. Usually British prints based on prints from this French magazine (and every British magazine used these prints) “borrowed” from more recent issues, often only a month or two prior. One has to wonder why it took over 9 years to use this print. At least the Ackermann editors, or Mrs. Gill, referred to the coat as French!