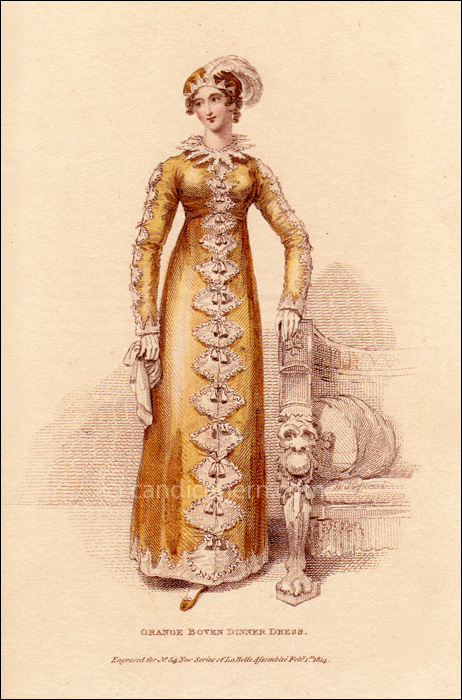 This looks pretty enough to be a dinner dress, but it’s a pelisse, not a dress. As a carriage costume, this was certainly not meant for lengthy carriage travel, but more likely for a ride in an elegant carriage in Hyde Park in  the fashionable late afternoon.

“A pelisse of the most delicate fawn colour Irish poplin, the skirt an easy fullness, the body tight to the shape, very short in the waist, and broad in the back. The front, as our readers will see by the Plate, is very elegantly ornamented with white satin points put on at each side of the front; a beautiful white silk trimming edges each point, and white silk tassels of the lightest and most beautiful texture tie the pelisse all down the front. The sleeve is ornamented in a similar manner on a smaller scale, but without the tassels; the bottom of the pelisse and the cuffs are also ornamented with white satin points, edged with silk trimming to correspond, and on each hip is a very novel and tasteful ornament, about the size of a large Spanish button: it is composed of floss silk in the form of a shell. A ruff of white satin cut in points encircles the throat; it is supported, we believe, by ribband wire, or something of that sort, as it stands up round the throat, it is edged with a very fine narrow white lace. Head-dress a small Spanish cap of white satin, or fawn colour velvet, tastefully ornamented with points edged with pearl, and a superb white ostrich feather, which falls to the left side. Fawn colour slippers and gloves. We have no hesitation in saying that this dress is the most elegant and novel that has appeared in the carriage costume for a considerable time.”

In January 1814, James Henry Leigh Hunt published the following poem in The Examiner:

Orange Boven
Huzza, my boys! our friends the Dutch have risen,
Our good old friends, and burst the Tyrant’s prison!
Aye, and have done it without bloodshed too,
Like men, to sense as well as freedom true.
The moment, I’ll be sworn, that Ocean heard it,
With a new dance of waters it bestirr’d it;
And Trade, reviving from her trance of death,
Took a new lease of sunshine and of breath.
Let’s aid them, my fine fellows, all we can:—
Where’s finer business for an Englishman—
Who knows what ’tis to eat his own good bread,
And see his table-cloth securely spread—
Than helping to set free a neighbour’s oven?
Huzza! The Dutch for ever! Orange Boven!