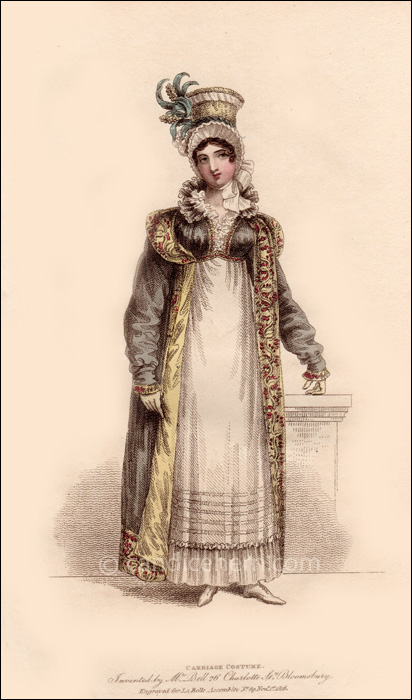 This ensemble is another example of the excesses of fashion that began in this year. (See also this print for an example of similar excess.) Too much going on. Individually, each element is somewhat nice: the bonnet, the dress, even the pelisse. But together, it’s all rather overwhelming.

Several elements foreshadow things to come in the 1820s and 1830s: large, and often crazy, bits of ornamentation on the bonnet (as with ears of corn here), the bell-shape silhouette, the broadening of shoulders, the greater fullness in the sleeves. As these were all very new styles, this ensemble may have been seen as very fashion-forward and chic. Though for me, it is a borderline fashion disaster! However, in the interest of historical accuracy, I present it here as part of the true evolution of Regency fashion.

“High dress of fine French cambric; the border ornamented with four tucks, and finished by a broad muslin flounce; full double ruff of fine lace, left open at the throat. Over t his dress is worn the elegant pelisse, entitled the ORIENTAL, of black, faced and ornamented with Cachemire shawl trimming, and lined with amber coloured sarsnet. British bonnet of amber curled silk, ornamented by ears of Indian corn, and the crown encircled by a wreath of corn leaves. Limerick gloves; and half boots of pearl grey kid.”