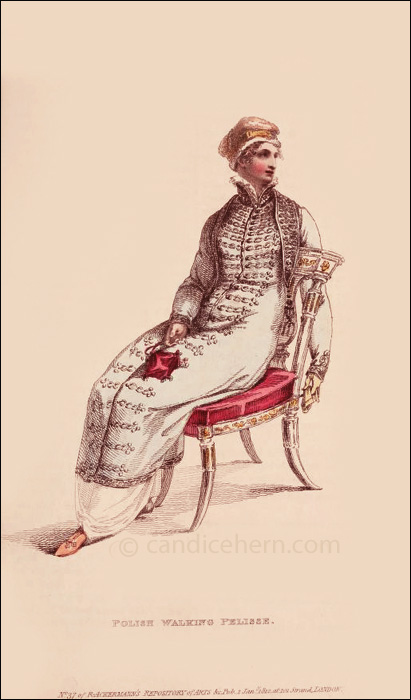 Military styles were quite popular in women’s fashion at this time. And although Polish troops fought with Napoleon against the British at this time, Polish styles remained fashionable.

Note that the little purse is referred to as a “ridicule.” The bastardization of the term into “reticule” did not happen until the 1830s.

“CARRIAGE OR POLISH WALKING COSTUME. A Plain cambric morning robe, with high collar, trimmed with lace. A Polish demi-pelisse of fine Lama or Merino cloth, richly embroidered up the front, on the bottom collar and cuffs. Pelerine to correspond, finished with a long silk tassel. Canonical cap of sable, oppenoch, or other tastefully contrasted fur, embellished and finished with gold band and tassel. Ridicule of rose-coloured velvet, with gold lion snap. Gloved of pale Limerick or York tan. Roman half-boots of buff-colored kid. This attractive habit is furnished by Mr. S. Clark, ladies’ habit-maker, No. 37, Golden-square.”

Mr. Clark was a well-known habit maker whose designs turn up regularly in fashion prints of the early Regency period. Advertisements for male habit-makers are seen frequently in the magazines as well. Most ladies’ riding habits had traditionally been created by male tailors, as they were very masculine-type garments. Certain styles of pelisses, like this very military-style pelisse, were also often created by male tailors. But about this time, c1812, female designers began to usurp the male bastion of habit tailoring, and within another year or so, Mr. Clark’s designs disappear from the pages of ladies’ magazines, and all tailored garments that have named designers are created by women.