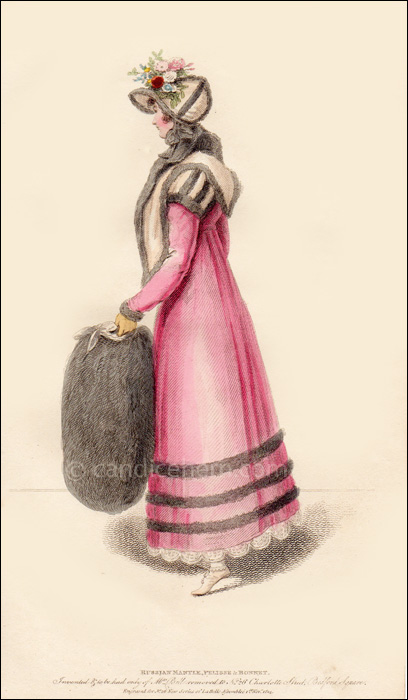 In the following description from the magazine, much is made of the trimming that looks like fur, but is not fur, and is “far more beautiful than fur.” But what exactly this trimming is, or what it’s made of, is never revealed. Perhaps it is simply an early version of faux fur.

Note the large muff, which one assumes is made of the same faux fur, and the charming half boots.

“This walking or carriage dress is perfectly new, highly appropriate to the season, and will most probably be the prevailing morning dress for November. There is great ingenuity in the mantle; it is the most elegant and novel thing introduced, and is ornamented with a trimming never before seen in this country, far more beautiful than fur, both in point of elegance as well as effect; it is expected to be worn universally this winter for muffs, &c. Mrs. Bell has the merit of having first introduced this elegant substitute for fur. The pelisse is made of rose colour satin for the carriage dress, and for walking, velvets and kerseymeres are most approved of; it is made in a most novel and tasteful style; the lower part of it is made tight to the shape, and is cut in points of better than a nail in depth; the remainder of the body, which is high, is put full into these points, which are edged with a rose colour silk trimming to correspond. The fullness of the body is confined by byas gagings, which has a very pretty effect: a double row of lace to fall over finishes it at the throat. A plain long sleeve, rather full, and confined at the wrist with the new invented fur trimming. The bonnet which accompanies this dress is one of the happiest inventions of Mrs Bell; the body always corresponds in colour to the mantle; the shape is perfectly novel and becoming in the highest degree; it fastened under the chin by a satin ribband, and a bunch of winter flowers ornaments it in front.”