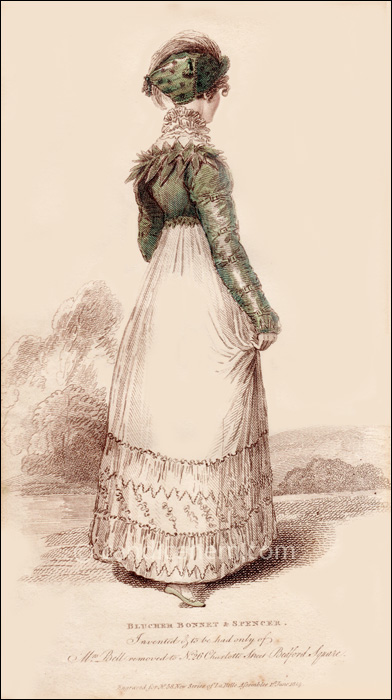 “Blucher Bonnet & Spencer. Invented & and to be had only of Mrs. Bell, removed to No. 26 Charlotte Street Bedford Square.”

The defeat of Napoleon in April 1814 and his exile to Elba set off not only celebrations throughout England, but had a lively affect on fashion as well. New dresses, bonnets, pelisses, and spencers were designed with names reflecting the spirit of victory. There were Bourbon hats and Angoulême spencers and Wellington headdresses. Here we see a bonnet and spencer named in honor of the Prussian field marshal Blücher, whose victories at Leipzig and Laon helped secure Napoleon’s defeat. (The following year, when Napoleon escaped from Elba and rose another large French army, Blücher played a significant role in the victory at Waterloo.)

“BLUCHER BONNET AND SPENSER. High Dress of jaconet muslin, with a triple lace ruff, and a profusion of lace let in round the neck. The bottom of this dress is trimmed in a most elegant style; a broad pointed lace flounce is sewed on to a piece of muslin of the same breadth, which is full, and gauged in a byas form at irregular distances; over this piece of muslin is placed a second flounce of scolloped lace, which is put on to the dress by a heading; this trimming has an extremely rich and elegant effect. The spenser is composed of an emerald green satin, with a trimming of a darker shade, and is appropriate to the season, made low in the neck, so as to display the profusion of lace round the neck and throat; the triple row of points which adorn it are in the shape of an olive, admirably appropriate to the present time. The sleeves are singularly novel and tasteful, and are fastened in regular distances à-la-Russe. The cuffs are ornamented in a manner similar to the neck. The bonnet is composed of emerald green, of a shape perfectly new, most becoming, and very different to any thing yet worn; a feather of a dark shade is placed a little to the side, and falls over to the point of the bonnet behind.

“The Blucher Bonnet, though expressly invented for the carriage costume, is yet in high estimation with our most tonish pedestrians: the elegant materials of which it is composed, the originality of its form, and, above all, its being at once jauntée and becoming, render it a favorite. Gloves and slippers to correspond.