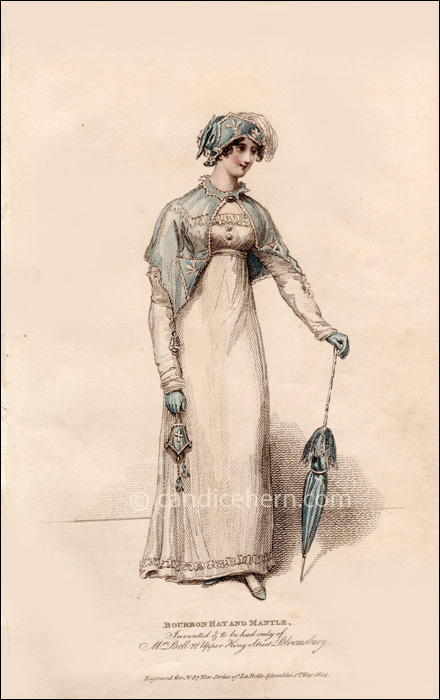 “Bourbon Hat and Mantle. Invented & to be had only of Mrs. Bell, 22 Upper King Street Bloomsbury.”

The General Observations on Fashion and Dress names both prints in this issue as “elegant walking and carriage costumes,” and also mentions that this mantle is “very much worn” in the carriage costume. So, clearly this ensemble was deemed verastile enough to serve as either a walking or a carriage dress.

Napoleon had been defeated in Aprill and exiled to Elba. Many fashion accessories were given the name Bourbon to honor the restoration of the Bourbon monarchy with King Louis XVIII.

“Frock of the finest jacconet muslin, embroider round the bosom in fleurs de lis; the waist of the dress is the same length as last month, but the bosom and shoulders are not quite so much exposed; the bosom is ornamented with embroidery to correspond with the train. The back is full, and a narrow white satin sash is tied in long bows and ends behind. Three very small white silk fleur de lis ornament the dress in front of the bosom. Plain long sleeve. The Bourbon mantle of azure crape worn with this dress is remarkably novel and elegant; it is ornamented behind with white satin, which forms the back in a manner perfectly original and singularly tasteful; the crape is cut at each side of the back in points, as is also the front; each point is ornamented with fleurs de lis and rich tassels; the mantle is edged round with with narrow byas white satin, and finished at the edge by by a very light and elegant trimming, which we understand was invented expressly for it. A small byas white satin collar which falls over, is fastened in front with a pearl brooch, and edged with trimming to correspond. The Bourbon Hat, patronized we understand by the Duchess d’Angouleme, is truly elegant and admirably adapted to the season; it is, in fact, a most novel and tasteful emblem of royalty; its form, which is peculiar, has never before  been introduced, and it is decorated in a style of novelty, simplicity, and elegance; not is its least recommendation that it is completely portable, as it may be packed even in a portmanteau in scarcely any space, without its being in the least degree injured. For the form of this attractive hat, we refer our readers to the Plate; the materials of which it is composed are azure satin, and the fleurs de lis, with which it is ornamented in front, are composed of pearl; a light and beautiful trimming of floss silk intermixed with pearl, goes round the edge of the hat, and an ostrich feather is tastefully placed to the side. Parasol, gloves, slippers, and Bourbon ridicule to correspond.”