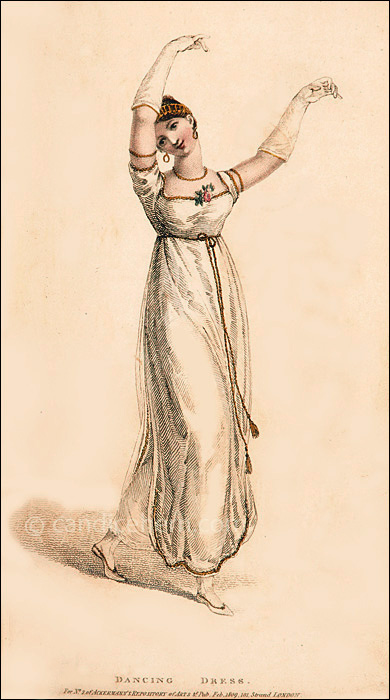 The description says this is an opera dress, which would classify it as half-dress, but because it includes so much gold trimming and gold jewelry, and the fact that it is meant for dancing, classifies it as a ball dress, ie full dress.

It’s quite a simple dress, with the gold trimming making it special. I love that a spring of flowers has been tucked into the bosom.

As noted on other prints, armlets worn on the upper arm were quite popular during the Regency. As with wrist bracelets, they are always shown in pairs, one on each arm.

“The head ornamented with bandeaus of frosted gold; gold necklace, ear-rings, and armlets; white satin opera dress, trimmed all round with gold, tied in front with a gold cord and tassel; white satin shoes, trimmed with gold, and gold button in front; white gloves, and fan edged with gold.”

In the General Observations, it states that, “Madame Lanchester (St. James’s-street) has furnished the designs of the fashions with her usual taste.” During this first year of publication, Ackermann’s Repository often included prints of fashions designed by Madame Lanchester, and it is believed that the General Observations and possibly even the print descriptions were also penned by the famous modiste, or at least overseen by her as a sort of fashion editor. You can read more about her here.