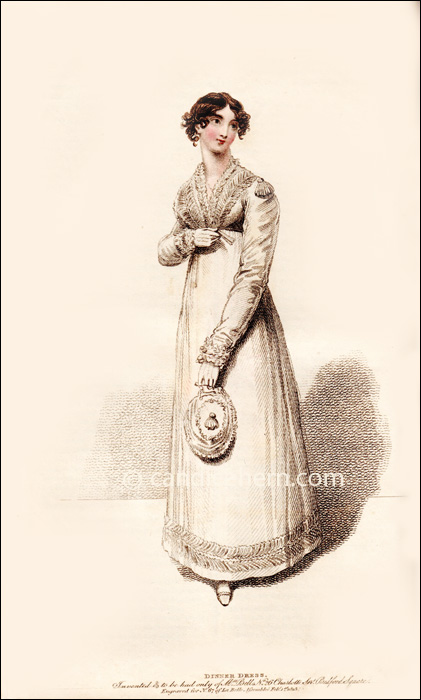 This is an example of a simple white dress made elegant by its trimmings. It is also interesting that the body and sleeves are made of different materials.

The Chapeau Bras used here as a reticule is an object invented by Mrs. Bell. It was a hat with a foldable hood small enough to store in a bag. Does this lady have a hat in her bag? Or is she simply using the bag that came with her Chapeau Bras?

“Half high dress of white kerseymere, the body elegantly ornamented with white silk braiding, and a double row of white love ribband quilled very full round the neck; white satin long sleeve, made very loose, ornamented at the wrist with love ribband to correspond with the neck, and finished on the shoulder with a white silk epaulet. The bottom of the dress is trimmed with silk braiding to correspond with the body. White kid gloves and slippers. The hair dressed without any ornament, in a tasteful and girlish style, in loose ringlets on the forehead, and fastened up behind in the French fashion with a knot of white ribband, White satin Chapeau Bras as a ridicule [ie reticule]. The tasteful simplicity and modest elegance of this dress cannot fail to render it a permanent favourite with our fair fashionables; and Mrs. Bell, the inventress, is certainly entitled to the most unqualified approbation for the ingenuity which she has shewn in converting the half high dress, originally one of the most unbecoming things we have ever seen, into a gown which is equally appropriate, delicate, and tasteful for dinner parties.”

The term “half high dress” was unfamiliar to me, but here it what is said about it in the General Observation on Fashion and Dress in this issue:

“The half high dress is originally French, and while it covers that part of the neck and shoulders which might without impropriety be exposed, it displays a part of the bosom which modesty commands to be veiled. This defect Mrs. Bell has happily remedied, not only in the dress which we have given our readers, but in those made lower in the back of the neck, which are certainly extremely becoming to the shape.”