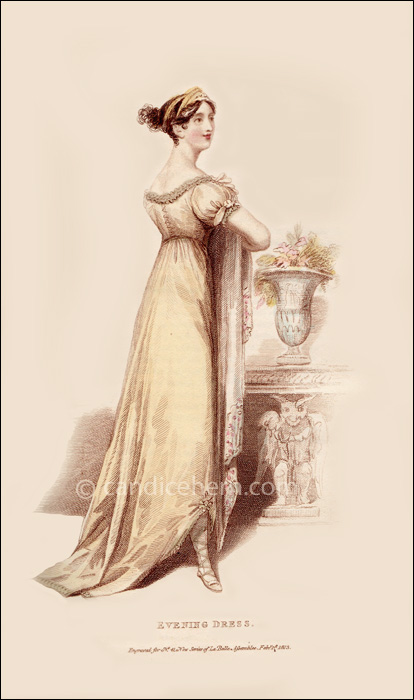 Showing so much leg is definitely unusual for this period. I suspect the dress is looped up merely to show off the spectacular sandals. (Any slippers that laced up above the ankle were known as sandals.) It would have been rather scandalous to actually walk around revealing so much leg. Wouldn’t it?

The hair ornament looks like a bandeau or fillet, but is called a turban.

“White satin round frock, which laces behind and is made to display the whole of the neck and shoulders; back extremely broad, and the waist as they were worn last month; a superb embroidery of oak leaves, which has a beautiful effect, goes round the bosom, the sleeves, and the bottom of the dress, which is also ornamented up the front by a piece of embroidery not quite a quarter of a yard in width, of acorns worked in gold thread, very much raised, and intermingled with oak leaves to correspond with the trimming of the bosom;short sleeve, ornamented with a rich gold tassel on the shoulder. Hair twisted up behind in a very large full bow, divided in front, and much fuller on the temples than last month. A turban of newly invented gold net, the texture of which is nearly as slight as gauze, and wove in small diamonds, is put on in different folds; it is exceedingly full in front, and is worn without any ornament. A rich but light chain of intermingled gold and pearl, to which is affixed a small pearl cross, goes twice around the neck; ear-rings to correspond. White satin sandals, which are very much displayed by the dress being looped up on one side at bottom; pearl rosettes. White kid gloves, and ivory fan. Superb India shawls of white silk, with a border of rich embroidery, is sometimes thrown carelessly over the shoulders.”