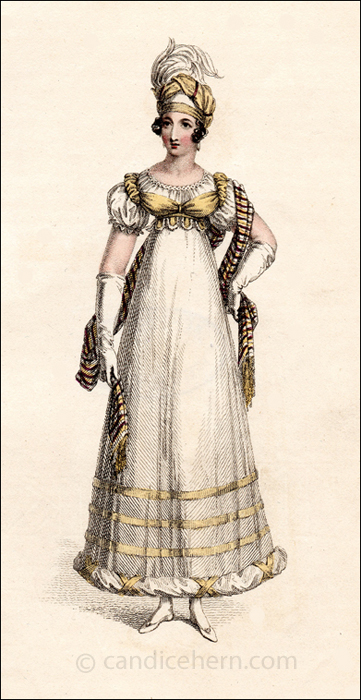 Before waistlines started to creep back down in the 1820s, they got very, very high with miniscule bodices, made to look even smaller in fashion prints like this one, where it looks like the model must have had her entire ribcage removed.

“A white gauze round dress, the bottom of the skirt finished by a large rouleau of white satin; the rouleau is ornamented at regular distances with braids of lemon-colored satin. The body is made plain, and higher than they are generally worn; it is finished round the bust by a single fall of blond lace set on almost plain. Short full sleeve, confined at the bottom by a row of white satin points. A lemon-coloured satin body, cut extremely low round the bust, is worn over the gauze one; it is finished round the waist in the French style by tabs, and has a small epaulette, which stands up on the shoulder, of a very novel form. Head-dress of Cambridge toque, composed of British net and pale lemon-coloured satin; it is of a moderate height, ornamented round the top of the crown by rolls of pale lemon-coloured satin; a bird of paradise plume is placed on one side. Necklace and earrings of pearl. White Levantine slippers, and white kid gloves. A plaid scarf, composed of net silk, is thrown carelessly over the shoulders.”

In the General Observations on Fashion and Dress, we find the following discussion of toques, ie turban-like hats without brims:

“Toques do not appear to be at present in so much estimation for evening parties as they have been for some time. We have been accustomed to see them in a great variety of shapes, but now the one which we have given in our print is the only toque generally considered fashionable.”