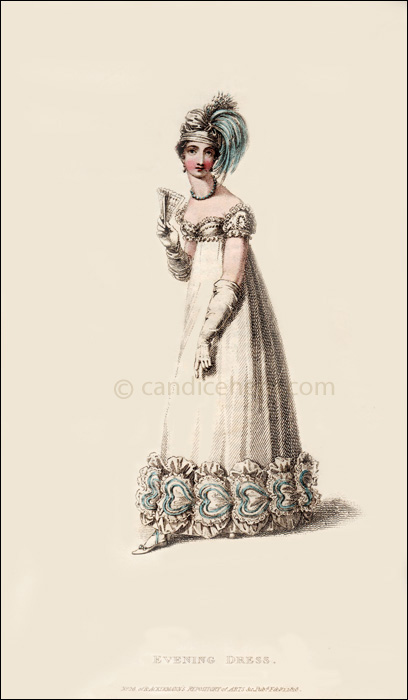 The next couple of years represent the era of the tiniest bodices. Since there is so little bodice fabric to work with, all the fussiness is given to the skirt. In 1820, the waistlines begin to drop again, slightly, though the skirts remain fussy and wider at the hem, anticipating the full bell-shape coming soon.

I confess I adore the shoes with the blue lacings up the ankle. I often wish they didn’t make the feet so impossibly tiny in fashion prints, so we could get a better look at the shoes.

“A frock composed of British net, and worn over a white satin slip: the body [ie bodice], which is somewhat in the Spanish style, is called the corsage à l’Infante; it is composed of an intermixture of white satin and British net, and ornamented with pearls. A row of points, composed of satin and net, finishes the waist, which is very short [ie high]. The sleeve, which is very short, is slashed; the slashes are filled with net, and edged with pearl; and the bottom of the sleeve, as well as the bust, is ornamented by a full quilling of blond. The skirt is moderately long, and more than usually full; it is finished with the most novel and tasteful trimming which we have seen for some time. This trimming, composed of blue satin, chenille, and British net, forms a chain of hearts, the effect of which is at once singular and elegant; it is surmounted by a light embroidery of fleur de lis in blue silk.

“Head-dress la toque d’Orleans: it is composed of an intermixture of soft white satin and British net: it is made a moderate height, and ornamented with a plume of heron’s feathers. The hair is disposed in a few light curls at each side, and the forehead is entirely bare. Necklace and ear-rings, diamond. White satin shoes, and white kid gloves. Spangled crape fan.

“… We are indebted to the taste and invention of Mrs. Bell of 52, St. James’s-street, for both our dresses this month.”