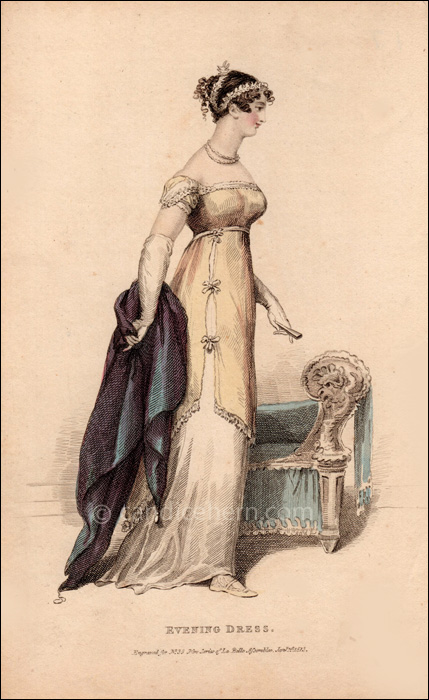 Though the short over dress is described as white, as is the under dress, every copy of this print I’ve seen shows it as pale yellow. Perhaps the hand colorists were given incorrect instructions? Or perhaps it was decided that making the over dress in a slightly darker shade set it off best from the white under dress.

Note the Regency bench with its gargoyle arm. Ackermann’s Repository had included beautiful pieces of furniture in its fashion prints from its first year of publication. That publication set the standard, and La Belle Assemblée happily followed.

“Plain white satin dress, with a demi train, made extremely low and quite square in the bosom. Epaulet short sleeve, which is set without a shoulder strap. Over this dress is a short one of white lace, in the form of a drapery, which is one of the most elegant and becoming things that we have seen for some time; it comes nearly to the knee in front, and is sloped to a point behind, where it is about a quarter of a yard shorter than the under dress. It is fastened down the front by rosettes of pearl, and trimmed round with a rich but nit very broad lace; a very light and elegant trimming, or either real or mock pearl, goes round the bosom and the sleeves, and as our readers will see by the Plate, is so contrived as to trim both without being divided; a band of the same goes round the waist.The hair is dressed in the same manner in front as last month, only rather more full, but the whole of the hind hair, which is fastened up behind, falls in light ringlets from the top of the head to the neck. A bandeau of small flowers, which is formed of pearls, goes twice round the head. Pearl necklace and earrings; white satin slippers, and white kid gloves; crape spangled fan. A rich tissue mantlet is thrown loosely over the shoulders by some of our elegantes.”